I guess this was the gig of the summer/year for me, my 37th Musikfest. It was strange to do it in the studio but it turned out pretty good for what it was. I was prepared.

Initially,  I was disappointed not to be one of the “band” acts (always in the shadow of Craig), but I was relieved to have any gig at all, since the cuts were brutal (so were the stipends). I immediately got Kris Kehr on board and it was a wise choice. He filled out the set nicely, added leads and it was simply great to play with my brother again.

I wondered what the layoff would do for the set, but, thankfully, I’ve been wood-shedding a lot these days so I found myself fairly confident that I could play with strength. Like I told the TV staff, I’ve been playing to a little white dot for three months now so I was practicing for this. Seemed I would be ready but I didn’t know until the moment. 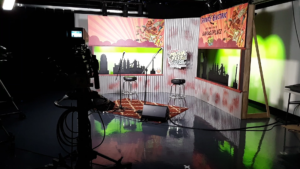 This was all new for the TV crew being the first day of this Musikfest. There are two studios – the big bands go in the garage and the small fry go in the regular production studio. We were all primed to maintain distancing, masking, etc. but the spirit was warm and funny. Some of it spilled over into the show itself, which was very cool. We’re all just making this up as we go along.

The sound was not as good as it could have been, especially since high-quality acoustic production is not something these guys do regularly, and the sound engineer is in a separate room. I’m not sure I even met him. Sensing the moment, I decided to go simple and trust in the mix. The sound check proved that this was new ground for these guys. So it goes and you let it fly.

The host interviewed me before the set and he was set on the “perfect attendance” theme, something that, now that I think of it, is kind of a participation trophy. I’m proud of it, but there’s little mention of what it really takes to be able to do this – artistically. I’ll have to put some thought to this in another blog.

I tried something different today. I stood up for the whole show, perhaps for the first time in years. I’ve been working towards some fitness over the pandemic, I’ve lost some weight, curbed a few vices and feeling healthier than I’ve been in a while. This was going to be interesting. And, though I was tired at the end, I did it. Good.

Kris and I led off with an aggressive Don’t Call Me Early, one of my strong folk pieces and we landed it. A solid beginning. Giants was playful, and the sound crew added sound effects which really loosened up the whole situation. Again, it was the right song for this strange set.

Rosie is a Friend of Mine –  is a straight ahead country tune with a great ending (on the 4) and worked well with my meager picking but today I played it well, nothing fancy. Stan Rogers’ Giant reset the arc of the evening with its open tuning, druidic passages and a nice space for Kris’ improv in the middle. The tune has great dynamics, sounds unlike anything else in the repertoire. I could see the camera men eager to get shots of our interplay, which was quite genuine.

As a nod to tradition, I followed up with The Cat Came Back (similar chord progression to Giants…) but it was a good way to acknowledge my part in the history of the festival. I said that I had played it at every one. That’s the truth. The newer verses at the end help make it fresh and humorous.

Home stretch. I was given a strict 40 minutes so the crew put in a digital clock to keep me informed. At various times I was taking mental notes, deciding to tighten a song up, add a lead, etc. Part of the process.

How Legends are Made worked well. I introduced it as a salute to the traveling folk pros who have now lost their ability to tour, play small clubs like Godfrey’s. It’s these folks that came into town and gave me my folk performance lessons. I played it well, and the line “How do you get back to Rt. 22?” would resonate with this LV TV audience. I’m glad I did a rehearsal in the afternoon. The playing was strong and mumbled a line in the second verse. (Damn! There’s always one!) But it was the only screw up of the set, so I’m cool with that.

Lessons from Pete worked well, especially with Kris’s leads and the general dynamics (isn’t that a mega-company?), the song continues to feel good. It says what I need to say.

Watching the clock, I wanted to end with something short, folky, direct and with some funk. We Are Welcomed fit the bill and I could read the clock and adjust. I actually dropped the lead at one point, noticed that I still had a minute left, did a different ending and crossed the finish line with 10 seconds on the clock. Damn! I had planned Pay Bo Diddly as a rocker but I went with the folker.

As Kris and I wrapped up (covid protocol insisted that we re-mask and leave the premises quickly. As we packed up, we got to exchange some chat, but certainly not enough for months between meet-ups. I put my trust in Kris, as always, and he knows how to follow my set ups, take a creative leap with his bass leads, and give me the opportunity to focus on the “audience”. I couldn’t ask for more.

The crew thanked us, said we did a great job (I believed them) and helped us out the door. Kris and I set off on our separate ways, but, driving back the few miles back to the SouthSide, I felt good, knowing that I did my best, played another Musikfest and could now relax for the rest of the festival. It was good to do it early; maybe good to do it before Service Electric fatigue sets in. I’ll be curious to gather comments from those who saw it, especially those from outside my circle of folkie friends.

I needed a good gig this summer. This was it. …and I feel fine.