An old friend Adrienne Redd asked me to come play for a block party/birthday celebration in Jenkintown, PA on Saturday night. Though, once again, it was for tips, I jumped at the chance to get out of town and play for real folks. It’s only an hour plus from Bethlehem so no sweat for me.

The small street was blocked off, and it opened to the back yards along the street. Various folks had set up tables with food, drinks and snacks available for people in the neighborhood to take in. There seemed to be a general friendliness as people came out in the early evening. I got there about 6:30 pm for a 7:30 start and I picked out a spot in front of a small garage to set up my amp and mike. Nothing fancy but comfortable.

Folks were masked, as was I, and, as I started in, I lowered my mask. A photographer, Alan Simpson, came by and started taking pix. As I began, I called to a group of kids across the street to come over and play maracas, tambourines and scarves, and it was a great way to create some energy on the street. Even as they took off after 15 minutes, the ice was broken and adults started to settle in, bringing in chairs, dancing in the street, etc. 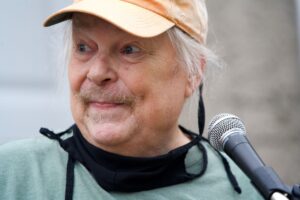 It was a mixed audience but it was great to see all colors playing with scarves, dancing with their kids. Just what a block party should do. A good and long-time musician/friend Kenny Ulansey and his son showed up towards the end. We reminisced about the old Philly Folk Festival, now virtual this weekend, and I commented that, as I was driving down today, there was a definite seasonal feel to the trip that linked me to the Fest. Chance of rain, the length of the day, etc. Powerful stuff.

As usual I had to field requests, some of which, surprisingly I knew. One neighbor simply couldn’t believe I didn’t know a whole slew of his suggestions, prompting the inevitable, “What do you know?” But, I hit enough to placate him, and his young son had a great time in the process.

I gave away a few CDs, picked up about $90 in tips, played for a couple hours and helped create a comfortable scene for the neighborhood dealing with this pandemic. I felt safe, though I had some questions about my safety on the way home. So much uncertainty.