Like on Facebook
davefrymusic@juno.com
A folksinger: adult, children’s and family-music performer — arts educator/entrepreneur and good-time rascal, all rolled up in one!
Dave's Virtual Tip Jar

Hey, friends, welcome to Dave Fry’s Way Back Photo Gallery, featuring some of the strange and wonderful performance adventures I’ve been involved in over the years. I know this stuff really dates me, but, let’s face it, I’ve been doing this for a while. I’ve learned from all these fellow artists and experiences, and they still shape what I do today. 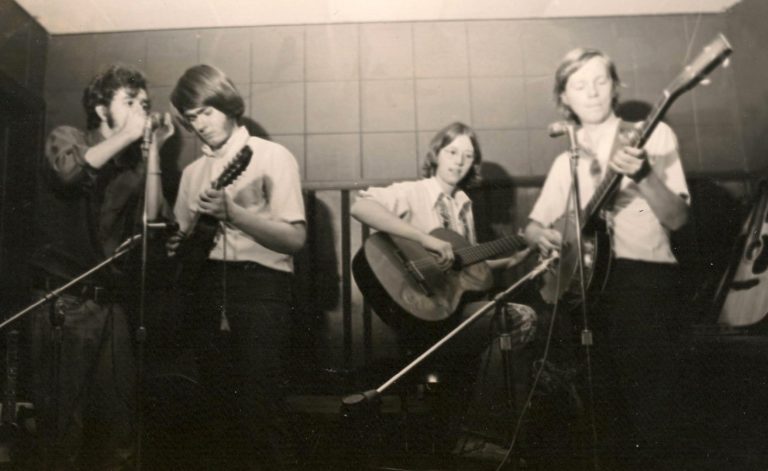 Let’s start with The Graveyard Skiffle Band, basically a jug band that I played with in the early 70’s while still going to Lehigh University. That’s Bob Flower on guitar, great harmonica and clarinet, Chris Simmons on everything else, Jan Sprague on guitar and me on mandolin, guitar and banjo. We prided ourselves in extremely esoteric tunes from the 20’s and 30’s. Here we are at The Toad, a truly underground club on 4th Street in Bethlehem in the early 70’s. 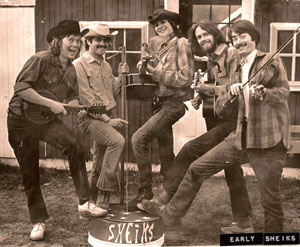 The Shimersville Sheiks began as a loose conglomeration of fellow Lehigh friends on a hippy-dippy farm in Seisholtzville, a “suburb” of Shimerville, PA in the mid 1970’s. Jerry Bastoni on washtub bass, Will Hart on dobro (and kestrel), LA Williams on guitar and Chris Simmons on fiddle, pictured in front of the Crab Shack, a converted chicken coop, and musical jam scene. 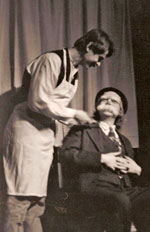 Godfrey Daniels offered a unique stage for some my more vaudevillian acts, including Chris Simmons and myself, as the unwitting customer, re-enacting “Sweeney Todd, the Barber” (pre-Broadway musical). Chris actually cut himself during this set, and finished the song bleeding profusely. The show must go on! Circa 1978. 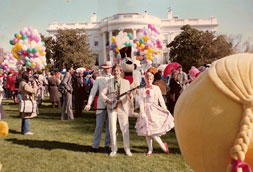 Yellow Moon Jamboree was another turning point in my performance career, as Touchstone Theater called on me to become part of a summer street theater project, with Bill George and Lorraine Zeller, along with Bridget George, founders of Touchstone. We built a quasi-medicine show, selling, no … giving away, love. The Cat Came Back oozed up from this show. We played the White House’s Easter Egg Roll (Reagan era) and the show introduced me to family audiences. 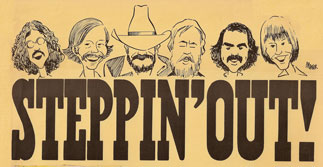 Steppin’ Out! was one of the great musical experiences of my life. Six world-class musicians, ostensibly a Texas Swing country band, who explored swing, Rock ‘n Roll, Celtic rock, rock/pop and more. Originally, Reid Trevaskis on guitar, Hub Willson on piano, Denny Danko on bass, Chris Jones on pedal steel and Jeff Biro on drums. Later, we featured Peggy Salvatore on vocals. We were an esoteric show band with a great sense of theater, playing for art museums, clubs, full-tilt country dance barns, and small clubs like Godfrey’s. I wish we could have had the recording capabilities of today. Still, a whole lot of fun! 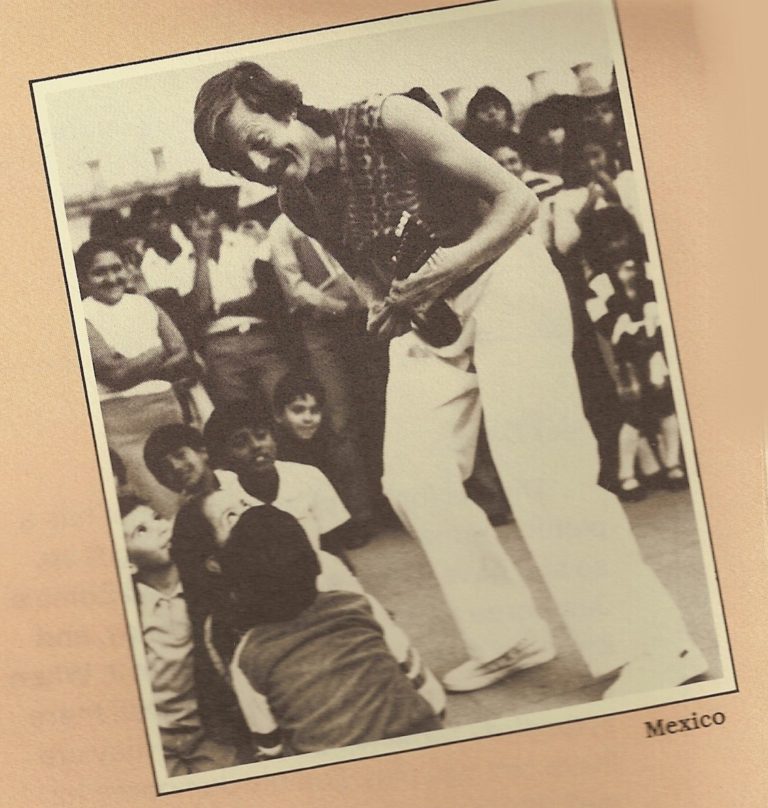 Touchstone Theater got the chance to tour central Mexico in the mid 80’s, playing small towns along with Bloomsburg movement artist Rand Whipple. We would set up our portable stage in the town center and put on our show. Each town would essentially shut down for the show, surrounding our troupe with all kind of folks. Art is a special occasion in the third world. 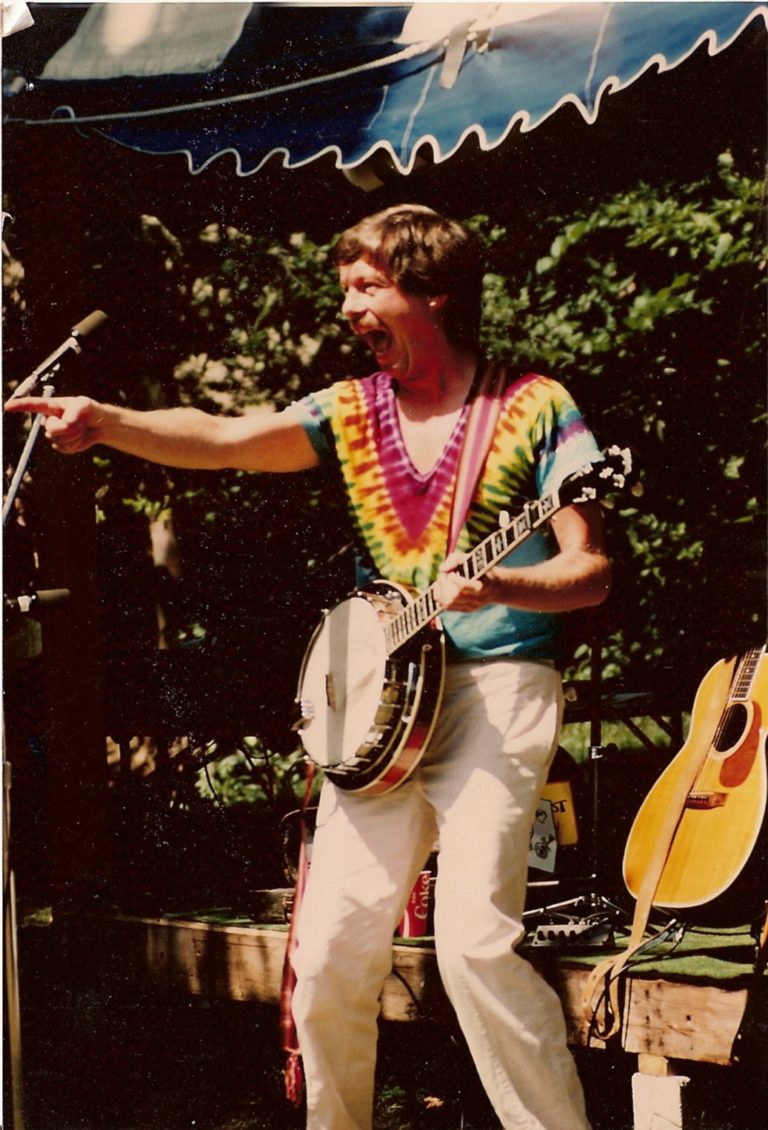 Musikfest, Bethlehem’s premier community festival and international phenomenon has always been a focal point in my performance calendar; a chance to measure my yearly artistic growth with those in my home town. I’ve been blessed to be one of the very few to have played every one of these events. This picture is from 1985, when I performed, stage-managed, emceed, etc. for 10 fabulous days in August. There’s something very special about playing for the home folks. 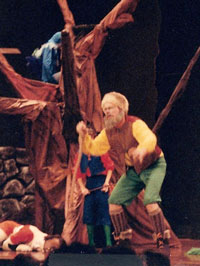 Touchstone Theater occasionally linked up with the Allentown school district and Allentown’s Symphony Hall to produce Peter and the Wolf, with cast and full orchestra. I ended up being the Grandfather (typecasting, you know), but I got to know the bassoonist very well. Makeup is cool … 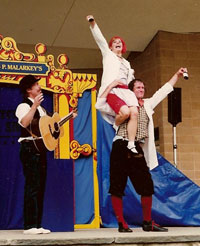 Professor Phelonious P. Malarky’s Last Ditch Medicine Show was the offshoot of Yellow Moon Jamboree, reuniting with Lorraine Zeller and hooking up with Harley Newman, professional lunatic. Here we are at the “Tah Dah” moment, selling our “Natural Aquious Solution.” Harley ate fire, zoomed around on a unicycle, Lorraine danced, and I was the good professor himself. 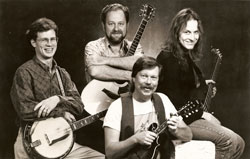 Pavlov’s Dawgs was one of my favorite acoustic bands. We called it “Bluegrass with Bite!”  Known for its attitude, we explored blues, Celtic, pop and reggae and traditional country with bluegrass sensitivities. Michael Beaky on banjo, Jessie Grim on guitar, Kris Kehr on bass and mandolin, and I got to hang out on mandolin all night. I loved it! 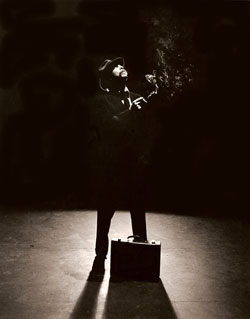 Touchstone Theater is truly an adventuresome theater group. My friend Bill George wrote a one-man piece called “Haunting at 905” in February 1988, a nightmarish journey into a haunted house, or, by extension, one man’s inner mind. One of the harder pieces I’ve done – no spoken words, lots of mime skills, and I had to try to smoke a cigarette. Yuck … 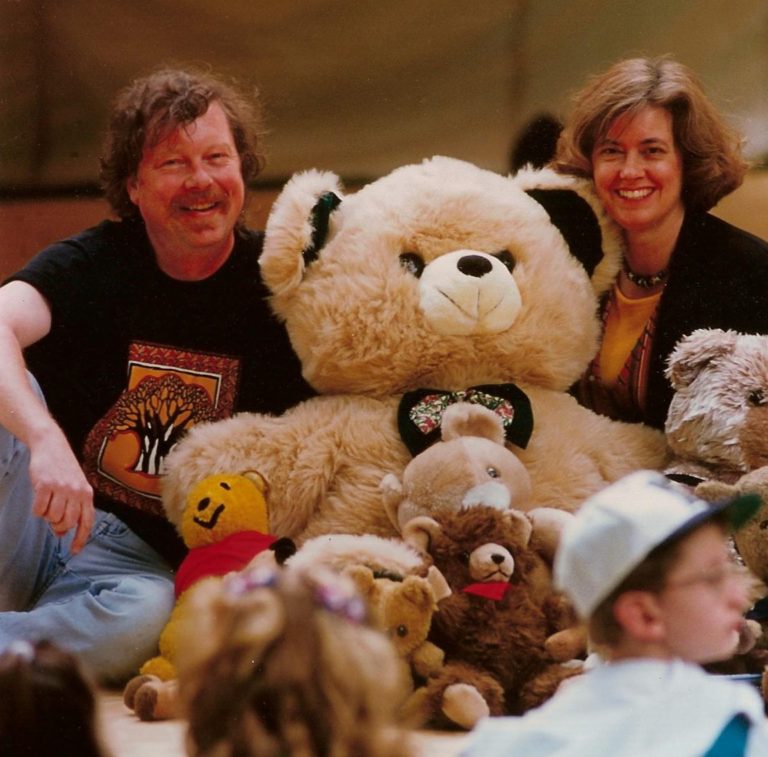 Bearly Lovable – A few years ago, Barbara Pearson and I put together a children’s play party called “Bearly Loveable.” People came out of the woodwork with their teddy’s, and we played and danced and sang with our bears. I got to learn “The Bear Hunt” and play one of my early favorites, “Teddy Bears’ Picnic.” 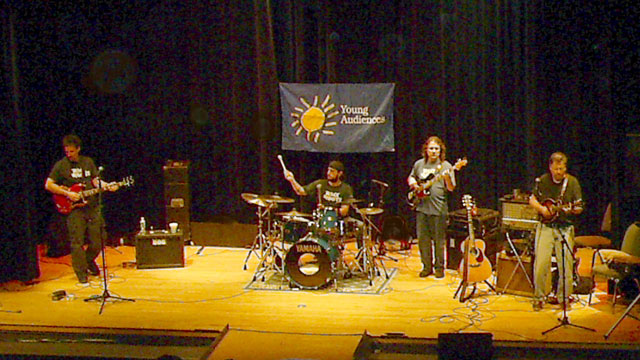 RockRoots continues to be one of my most enjoyable and rewarding musical experiences. We still perform all over NJ and PA at schools and festivals. It’s an incredibly tight and educational show documenting the history of Rock and Roll. Donnie Mayer on guitar, Kevin Soffera on drums, Nick Franclik on bass, and me on mandolin and guitars. We play for thousands of kids every year, with resounding success. It’s very cool and a very, very good show.