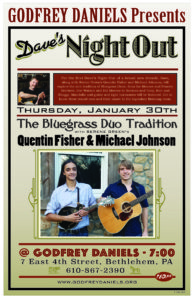 Back from two RockRoots gigs this afternoon, I had a chance to reboot for a Godfrey’s gig, a Dave’s Night Out. Tonight was Michael Johnson and Quentin Fisher from our emerging bluegrass stars Serene Green. I dreamed this up a long time ago so I was looking forward to this evening. Que and Micheal have been doing a duo for months, years, as friends and band mates. I asked them to work on Old Time Bluegrass Duos as a theme. They did great!!!

I’ve been working with a “sit-down” format, playing and conversing in chairs on stage. Michael emailed me that they were going to be standing, and working with a central mike, as they do with the full band. I negotiated a combination of the two and it worked very nicely. I trust my folk production instincts. As it turned out, it proved to be a very nice move.

I started out with Truck Driving Man, an old Steppin’ Out! tune that I pulled out of my ass for this one. But, it was a good way to have Q and M add some chops. Established the improvisation to the evening.

Quentin has really accepted his role as lead communicator for the band, with humor, factual knowledge and a welcoming stage presence. Frankly, I told him I see a lot of me (with my Sheiks/Skiffle Band/Steppin’ Out! duties) in his stage craft. Q’s the real deal.

I pulled out the Delmore Brother’s Deep River Blues. It was good break to the countryish sound, with more of a blues tone. It was appreciated and surprised some of the folks who haven’t heard me play. 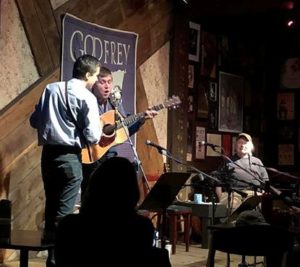 After some more sit and chat, I asked the boys to take the single mike set up to the side. , to demonstrate how they usually play. Bang. They played some flawless duo tunes and the audience got to see it done to perfection.

As we settled down again, I pulled out Golden Bird, a old/new tune for me, and one I had run through earlier at the sound check. Again, it was great. I asked to join their band and they asked to join mine. That’s pretty cool. We should do it.

We wrapped up after about two hours, and Q said we could have gone on. I agree. I was pleased to introduce both Quentin and Michael to the concept of a small stage conversation and they both came up big.

It was a very long day on stage(s) but quite a good way to roll.