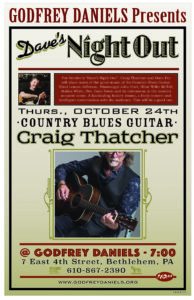 This was a good one. The topic tonight was Country Blues Guitar and my guest was my good friend Craig Thatcher. I’ve admired Craig’s electric guitar work for decades but he has become a wonderful acoustic player and supporter of Godfrey’s over the last few decades, as well. He now tours the world for Martin Guitar and I can’t think of a better ambassador than him for this legendary company.

I asked my friend Mance Robinson to do a short set in the middle and he knocked it out of the park with a Lightning Hopkins and a Skip James tune. It was a tough set for him in front of a crowd of folks unfamiliar with him but his playing and his patter were spot on. I am proud of the man and the player he’s become. People tuned in.

I started out with a Mississippi John Hurt tune, See See Rider which Craig immediately picked up on. We talked about the blues as a common language and that we didn’t have to rehearse for this. We passed back and forth Robert Johnson, Mance Lipscomb, Blind Willie McTell, Willie Dixon, Rev. Robert Wilkins, Jorma Kaukonen, Woody Mann, and a whole panoply of influences, cultural effects, British rock bands and more. It was an incredibly rich evening of intelligent music and talk. It was a deep dive.

I got to play Charlie James, Delia, Spoonful, Prodigal Son, Fishin’ Blues during the set. All pretty cool songs. I sang them well (so I’m told) and Craig had some great leads on all of them. Again, he knows how to find the spaces.

I particularly felt good with preparing material for the show: a wide spectrum of styles, picking techniques, tunings and accompanying stories and lore. Craig said that we could go on for hours. I agreed. 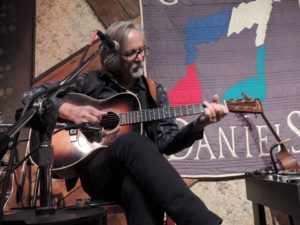 It is an incredible pleasure to share the stage with Craig. His instincts, his chops and his stage presence are at an incredible professional level. He listens first and plays second. We both had our antennae up tonight and the audience sensed it. I was able to raise my game thanks to his presence. It was a college-level seminar tonight. All for a $10 ticket.

Republic Tri-Cone, on loan from Pete.

It was an almost full house, but with too many no-shows, especially when we announced a sell-out earlier. Drat. The magic of Craig filled the house but I can only hope that folks will come back for future DNO’s. The atmosphere remains electric, regardless of the guests and the size of the crowd.

I realized afterward that I am a “product” driven artist. I had something to prepare for (I could have done more) and developed material that was well-played, interesting and professional. I could count on my fearless banter to fill in the spaces and it worked. But I need a deadline inspiration to put me to work: my Troubadour album, the Steppin’ Out! shows and other public appearances. It’s the kitchen work that suffers when I should be playing for myself and my art. I need to kick myself in the ass to just pick up the guitar and play. I need more gigs to challenge me. 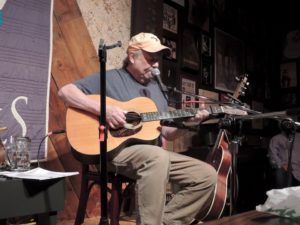 I got to drag out some of my old instruments (which sounded great tonight) along with a new borrowed Tri-Cone, and I enjoyed playing some of my favorite Martin friends.

I am proud of tonight’s show in this particular venue with my friends on stage. The totality of this situations didn’t strike me until now. Intelligent music in front of an intelligent audience in an intelligent venue. There ya go.