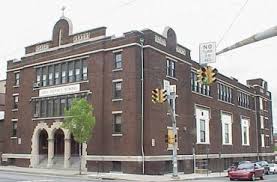 I headed up to the new site of Holy Infancy School, now up South Mountain a half mile from home. What was a gargantuan school has been moved to a more modern building and it’s quite nice. Lots of windows and sun light. I lined up an acoustic set for the pre-k, K and 1st kids in the cafeteria at 8:45.

I’m having some communication problems with the new principal as I sat in the office for a half hour until one of the teachers came down looking for me while the kids were waiting upstairs. When I got up to the space, I unpacked and introduced myself to the kids. (I am long-time friends with the teachers, going back at least 12 years) 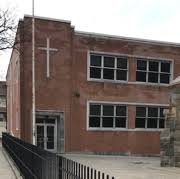 Since these were new kids for me, I launched into my standard set: I Like Peanut Butter, Tutti Tah, Down by the Bay, I Wanna Be a Dog, Giants and Magic Penny. The teachers allowed me lots of time (they said, “It’s a Monday.”) so I was able to do some in depth work.

We did Tutti Tah and then spent some time unpacking it by reversing the process. What came last, second to last, etc. It was tough but the older kids latched on and we worked it through. Down by the Bay involved creative rhyming with animals they came up with. Again, the older kids pick up on it. (Even though the little ones don’t know about these skills yet, it is a great model for them and an important exposure for them.)

As I do frequently in these small group sessions, at the end I asked the kids, “What did we do today?” We worked on recalling song names, etc. The important thing being reflection and conversation.

I then asked the three teachers what they liked: reverse-engineering, movement and rhyming skills. It’s good to hear from them, and good for the kids to hear, as well.

The principal dropped in for some of the later work and got to see some the “best practices” that I use. After the show, she thanked me for being part of the school curriculum and is going to install some “best practices” with the teachers shortly. I said I’d like to come back to this group monthly as well as do a Christmas time show for the whole school, like I’ve done in the past.

As we parted, I was surprised that she asked me if I felt okay. I said that I had some strong coffee this morning and apologized for being somewhat intense. But I said, it is intense work for me. I really don’t know how to be more mellow when I’m in the heat of these sessions. I am on stage, frankly, trying to figure out how to engage 40 young kids.

So it goes. Good work for no pay.