I am grateful for my annual gigs at Brookside Country Club. The club and staff pay me well, put on a great time for their families and they appreciate what I do for the members. It was a a particularly stormy day and got to the club with 20 minutes to spare. I quickly set up and actually started early before noon. The folks started drifting in and I always love to see the kids’ eyes light up when they see me and my bag. 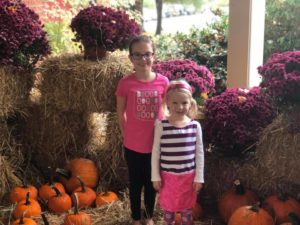 This is a two-hour gig and I plan to play straight through. Though I don’t play to a concentrated audience in front of me, my job is to provide the musical atmosphere for the room and engaged the kids, parents and grandparents that come up front. There’s also plenty of things going on, especially when the weather outside prohibits outdoor activities as in the past. There’s lots of food, pumpkin painting, face painting and more so I feel fine doing my thing as part of the whole shebang.

One gentleman came over during the second hour and said that he and his family have been enjoying my music for decades, a familiar refrain, but this was particularly curious. His son worked in Japan, married into a Japanese family while there. He told me that my music (CDs and perhaps tapes) were being used to teach that family English. They especially liked I Like Peanut Butter. His daughter-in-law came over early in the afternoon with his two grandchildren and immediately got involved. 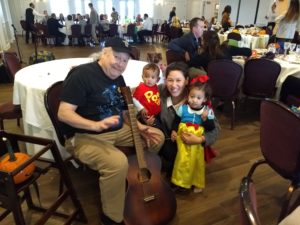 After I was done, I stopped over to talk with the family. Even the Japanese grandmother said, “Peanut Butter”. Here’s a photo of my friends. This music sends ripples throughout the ether and makes me very proud to be doing what I do.

The sun came out and I took the long, scenic way home, admiring the rich fall foliage that I know and love along the roads I’ve traveled for many years. A good day.