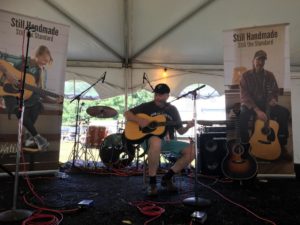 I had finished up my shows on Saturday and was looking forward to cruising the Festival on Sunday. I checked out a Korean group at noon at the Culture Tent and loved it. I love the surprises. I stuck around for the Martin Jam and hung out (escaping the brutal heat and sun) and played Lessons from Pete for the small audience.

I enjoyed simply running into friends on the grounds, chatting with strangers about their Godfrey’s experiences, enjoying a little recognition and generally laying low in the heat. I spent some time in The Grotto with Scott Peterson on his birthday, rambled through Hospitality and caught some of the early acts on the main stage. I really wanted to experience David Crosby and Friends as the final act.

The evening had cooled down a bit and there were a few stars among the clouds to the east and some distant heat lightning to the west. Crosby came out with his cracker-jack band and started the show. Sophisticated music. Watching from the front, with the looming video screen and deafening sound, I figured it would be cooler to head on up to the side of the stage to catch the back-stage action and more comfortable sound. Since I’ve had access over the years with my performer’s pass and the general familiarity with the crew from my emcee days in the past, I felt at ease getting close to observe. I also know how to stay out of the way. This always makes for an amazing experience and tonight was just that.

I checked out David’s guitar tech first, with a rack of very nice Martins and several electrics. The tech had a computer, strobe tuner and all the fixin’s, ready to go out and hand David a fresh guitar for each song. All that gear in a handy road case, the mark of a true professional. I wouldn’t mind doing this for a while. Or not. 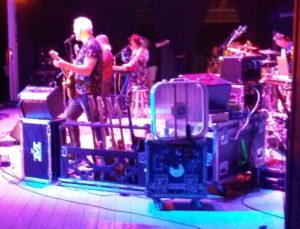 I made it over to stage left to watch from the guitarist Jeff Pevar’s  point of view. It was as close to being on stage with band as it could be. Jeff was incredible, and obviously tight with David. It was fascinating to watch the communication going on between the players and David, the smiles, the appreciation among such great players. I even got to witness the road manager try to get David’s attention during his rambling introduction of the band members, to tell him that there wasn’t a lot of time left. I particularly liked observing Jeff’s set up, with amps, guitars, monitors, fan (!!!) and other gear, again, all road-worthy and set up on road cases for a long tour on strange stages. Very cool.

The band was so tight and the vocals were, of course, up to CSNY standards. Seamless harmonies. David was warm, engaging, chatty with the audience and in his element. It’s no wonder; he’s been doing this on major stages for decades. In fact, this weekend was the 50th anniversary of Woodstock. The band finished up with Wooden Ships and Ohio. That’s as powerful a closing set that one could imagine.

The sky opened up during the set as the storm finally rolled in. I was glad I made the decision to come up under the protection of the stage wings. I wasn’t looking forward to gathering my guitar from the hospitality tent and getting soaked going back to my car. As it turned out, things abated when I finally packed it up.

The tour bus pulled up next to the stage and as folks gathered off stage, David took time to chat with the crew. I got to be the fly on the wall for this whole episode. I have had several opportunities at this festival to be able to witness some of the great performers that I have admired, and actually have been able to introduce from this stage. This was extremely special in that it was an incredible show with a powerful band. This is good for my folkie soul. It was a rock and roll  masterpiece just 20 feet from me.

I meandered home through this rural Pennsylvania country side I love so much, a route I’ve driven so many times as as a young folkie, and  workshop participant and a main-stage emcee for 47 years. I had a small footprint at this one, but tonight, I was high as a kite, driving in complete silence, filled with memories of this powerful show, my three days of small performances and my rich history with the Philly Folk Fest.