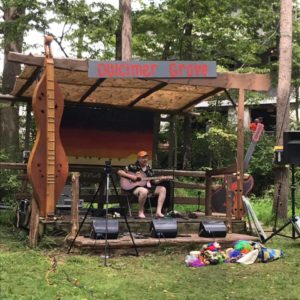 I headed for Dulcimer Grove for my 2 pm set and there were very few families set up, and none up front. But my good friends Ramona and Jack were able to secure a hammock nearby so I had them to play for. I decided to take advantage of the situation and play some of my more adult kids’ music like A Place in the Choir and Shoo That Fly, as I emptied my bag ‘o instruments in front of me from the get to, spreading the chum, so to speak.

Of course, there was a loud concert going on up on the Camp Stage above me, so I just decided to play the best I could, encourage kids to come down and pick up and instrument. One small girl took the bait, but her older brother feigned indifference. That put the old mark on him and I eventually won him over with thunder tubes later on.

Eventually, kids came on down, a few parents came up and sat down near the stage and I felt I finally had something to work with. I thought I did better today and had gained the respect of the stage crew and sound man over the two days. I did get some nice feedback later on in the festival, but not the immediate gratification I get from playing assemblies and in-school workshops.

But, it is this gig that gets me invited to this festival.

I had the rest of the day to roam the grounds, meet some new folks and some odd acquaintances. Towards dinner time, I was feeling wiped out, sat down at a signing table in the hospitality area and made a new friend Leslie. She said I was looking pretty pale and so I figured that I should just drop back and hydrate. Some other hospitality women came over and tended to me with Gatorade, ice and more water. I was glad to have found a spot in the shade to cool my heels.

I hung out in the Grotto and caught some of the stage acts on their screens, headed out to the front seating to see a great set by Kathy Mattea and a kick-ass Canadian Celtic trio Talisk, and decided that was enough for today. I got back home around 9:30 to recover from the day.