I was up for two sets at Philly today, with a nice Pete Seeger workshop on the Craft Stage at 11 am and a Family show in Dulcimer Grove at 2 pm. It was to be a study in contrasts. 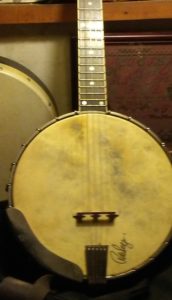 I woke up at 3 am thinking about doing a Pete standard, as opposed to the more obscure tunes I know, and I was thinking about my banjo, signed by the man himself. I got it out of the case and it was in tune! Amazing. I looked up Where Have All the Flowers Gone and figured I could work this one up. The history of the song is pretty cool but I had to figure out how to deliver the song on banjo. It wasn’t quite claw-hammer but I found a way to make it work.

I made it to the site with some time to spare, ran over the songs in the empty hospitality tent and then headed over to the Craft Stage, met Matt the Electrician and reintroduced myself to Christine Lavin. I offered to lead the workshop and we started off a 11 am to a fairly small crowd on the hillside. It’s hard to roust folks from a late night in the campgrounds. I was a little disappointed in the turn out, considering the full hillside at the Pete workshop in 2014 (that one featured Janis Ian). 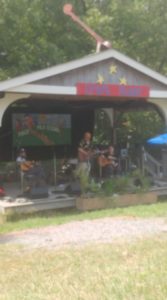 I started out with Where Have All the Flowers Gone and it was a little rough, but I figured folks would be singing alone. Still, there wasn’t a critical mass of folks to help. I could have done better. So much for last minute ideas. Matt followed with If I Had a Hammer and Christine told some funny Pete stories from some of her gigs with him. I followed with False From True and did it well. Matt did one of his originals that had little to do with Pete, as did Christine and her next song. Both quite humorous and entertaining.

We were running low on time so I did Lessons from Pete which was appreciated and Christine finished with a killer Wemoweh version, updated for Trump. “In the White House, the whinny White, the Liar tweets tonight.” It was a riot and perfect for the end of the workshop. Still, I wish that I had time to salute Pete’s kids’ material and that Matt and Christine had focused more on Pete’s material.  As a friend commented on FB, each workshop has it’s own life so I’ll live with what happened today.

It was brutally hot today and I was soaked to the skin after this one. Time to kill until the kids show in Dulcimer Grove. I hung out and caught up with my friends under the main stage in the Grotto where they record all the main stage shows. I’m finding that I’m welcomed in the nooks and crannies of the festival stemming from my emceeing duties ten and fifteen years ago and I get to roam the festival freely.