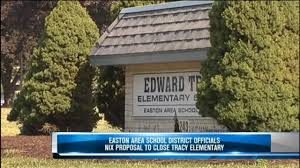 I have a old relationship with this nice rural school outside of Easton. I’ve done assemblies there in the past and even another songwriting day in the 90’s. Mrs. Ferraro, one of the third grade teachers, was looking for applying a local arts-education grant towards something different and contacted me to see if I could do my residency. You bet. My residency work has dropped off considerably since the 2008 financial collapse, so I was excited to oblige. 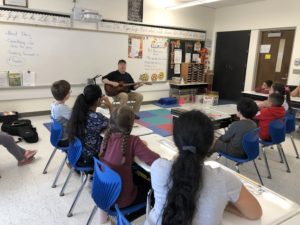 We lined up the four classes in the third grade with an ending session in the gym at the end of the school day. I decided to use my Down By the Bay as a way to break the ice, work on simple rhymes and still get three verses out of each class. I then decided to work The Cat Came Back as a template and I thought we’d be able to generate a good verse with each class as well. It proved a good method.

I had fifty minutes per class and, amazingly, things rolled along nicely. The kids were engaged as I tried to pass around the lead to everyone in the class, including the quiet ones. The kids came up with some interesting scenarios for the Cat Came Back, we collaborated on ideas, I would lead, prod and suggest, and, as always, we got the job done. We edited, practiced, got up and sang. 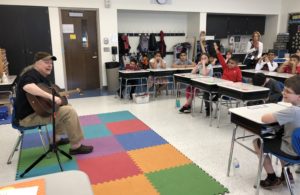 I also suggested that the kids do ‘album covers’ of their song, and I look forward to putting them together with the song in a movie/power point production and give it back to them and the school. Thankfully, teachers were taking pictures that can be added to the final product.

I gave each class my Playground CD and I found out that none of the classrooms have a CD player, and that if the kids had any chance of listening to my music, there would have to be some kind of technical transfer. Amazing how things have changed.

I learned a couple things. During the last session, it dawned on me that the cat could be a female. (duh…) so we changed the lyrics to reflect that. This is a product from some recent TA training sessions.

As I started one session, I asked the teacher to play my CD for the kids. I was baffled that there was no system to do that. Unfortunately, there was a misunderstanding. I suggested that the teacher figure it out, in my rather abrupt manner. The teacher pulled me out to the hall and said that I had no right to dictate what happens in that classroom. I was humbled and agreed not to do it again. I walked back into the class, tried to mentally regroup and start the work with the kids. As it turns out, the teacher thought that I implied solving the CD problem immediately. I had meant for the teachers to do it after I had left, with no time pressure. I should have made that clear and I came off somewhat arrogant.

As it turns out, at the end of this particular session, I apologized to the teacher, who, having seen me work with the kids, knew that I meant no wrong, and then apologized to me. But, I learned an important lesson that, as a teaching artist, I enter into the teacher’s space and should be respectful of that. I seemed to steamroll my way into the process, knowing I have to produce a quality, creative experience with a final product at the end of the period. Interesting situation that will make both of us aware of how we react. 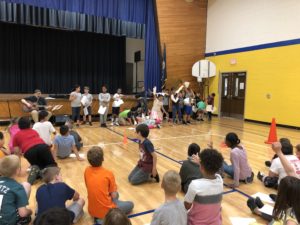 The final session in the gym was great. As the teachers and the principal looked on, each class came up and performed their Down by the Bay and Cat Came Back verses. I insisted that the other classes give their classmates a standing ovation. Each group did their own Super Star at the end. Towards the end, I had several kids stand up and say what they learned in the process and then asked the teachers to do the same. It was a great way to reflect, as a group, on what we had down together. I said that I felt that I was now part of their community, and that’s what mattered most to me.

At the very end, I played some rock and roll and got the kids to get up and dance. It was a good way to let go some of the steam and finish on a physical note.

The Cat Came Back

The cat went to the Tracy Invention Convention.

There was a portal to another dimension,

Where the cats have pets: human and canine,

It was only a cat nap; he was no Einstein.

Mr. Bonilla and the tiger-cat were playing in the mud,

They needed a bath to get rid of the crud.

They went to Palmer Pool and did a cannonball,

Hissing, scratching; you could hear it in the mall.

Beyoncé and the cat went out on a Friday night,

They got Uber limo, looking for a lite bite.

They got anchovy pizza, went to the ballet.

Third grade asked the cat to lunch in the Courtyard,

The cat thought it disgusting, she was quite impolite,

She tossed a chicken nugget, started an epic food fight. 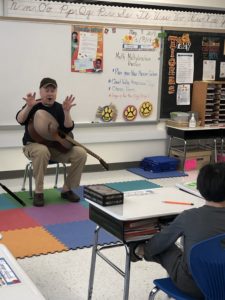 Down By the Bay:

Shark glowing in the dark.

Jackrabbit having a quack habit.

Crocodile with a freaky, creepy smile.

Unicorn with a foghorn.

Armadillo chomping on a pillow.

Penguin doing the macarena and tangoing.

Blue Jay with a May birthday.