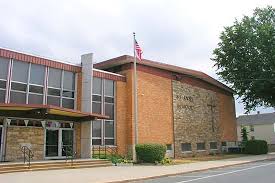 We had a 9:30 am assembly at a catholic school near Trenton, a school we’ve played several times, most recently about five years ago. And, as it is with parochial schools, there were stairs…..

There were about 300 K – 8th graders, with the younger kids on the floor of the gym and the older kids in movable bleachers on the rim, so it was a comfortable arena for us. I noticed that the seventh and eighth graders had pen and paper with them and they seemed to be taking notes.

We did a really good show, and Wayne played some very nice leads, Kevin and Nick doing their usual solid playing and I seemed to remember everything in the speechifying department. So, it was another very good gig. The kids were especially respectful and their were great moments throughout. Three young girls got up and jigged – always a nice community connection early in the show.

The teachers loved it, and I had a chance to chat with the music teacher who was ‘instrumental’ in bring us back. She explained that the older kids were taking notes for a quiz on American music, and, combined with our study guide, would give them a pretty good overview on the subject. The little kids got to dance and see a live band, and take in any history that sunk in. There’s lots of positive elements for even such a broad spectrum of ages. That’s why the show works for audiences like this.

And a group of the older boys carted our stuff out to the curb. I love catholic schools.

Not a bad day out, with a 7 am departure and noon arrival back home. Good stuff.