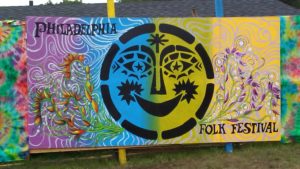 I headed down to the Philly Folk Festival for the Sunday workshops and concerts. There was a minor chance of rain early, and, for the most part, outside of a fine mist, it never really poured. I had gotten a press pass from DIY and hoped to do some interviews with folks I ran into. (As it turned out, I had equipment failure, but more on that later.) I parked in the day-time lot and took the shuttle bus to the site, got my badge and headed into the grounds.

Not much was happening early so I checked in with my friends under the main stage in archives. These folks record all the main stage shows so there’s lots of sound and computer stuff going on. Dedicated people who’ve done this for years. I’ve had a good relation with a lot of the staff who recognize me from my emceeing, my Godfrey’s credentials and general acquaintance over the years. I’m lucky that I have access to everywhere: hospitality, backstage, side stage, etc., so I tend to wander around, bump into performers and friends.

I headed to the Lobby Stage to catch Trout Fishing in America for their family show. I haven’t seen them in years and they are as good as it gets as performers. Keith and I swapped getting old stories – knees, hips, etc. and this seems to be the way of the times. I then went to hear Alash, Tuvan throat singers. Truly amazing sound vocal sounds with a beat boxer gut from Baltimore adding percussion. Ancient, yet totally cutting edge music. I went to the Craft Stage to see John Gorka’s songwriting workshop as he mentioned Godfrey’s several times.

Then back to the Lobby Stage to catch Missy Raines and the New Hip. Missy’s played bass for three different bluegrass acts at GD’s over the years, but I’ve followed her new career as front woman for a jazz-influenced acoustic band – The New Hip – which I play often on my radio show. They were great.

I saw that Martin Guitar was doing an open mike so I went to the Culture Tent and signed up for a one song slot. I hung around to listen to the folks who played until it was my time. I launched into Lessons from Pete with a slightly out of tune Martin. Sure enough, I blanked on the second chorus, and though no one noticed, I did. I was disappointed but got some nice compliments from a lot of folks. And it was good that I played at least one song at the festival. 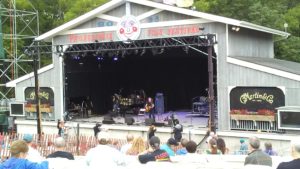 John Gorka was on early on the main stage so I headed over to catch his set and take some pictures. It was cool to see him on such a big and famous stage. I was surprised when our friend Russ Rentler came out to back John up on mandolin. It was a gas for him. John did a nice and long set, charming everyone with his humble patter and brilliant songs, including a bunch of new ones. 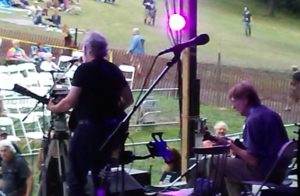 I headed backstage to get some shots from stage left and stage right, get into the perspective that I’ve become privy to all these years. 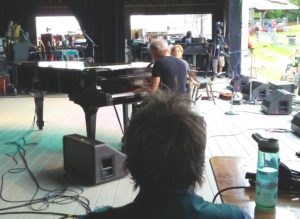 One very cool moment came as I was on stage right near the video monitor. Mary Gauthier, a veteran songwriter and performer, sat in front of me, took in John’s set and even took some snaps of him on stage. John, though a close friend, has the respect of many, many major performers on the folk scene, and they stop what they’re doing to catch his set.

I did some interviews with Missy Raines about her remarkable position as a woman bass player leading a band. These Godfrey’s connections are wonderful because the immediate reportee and mutual respect is there. I went under the main stage to interview Lied Sorbe from Tempest and Ezra Idlet from Trout Fishing. Great conversations and reminiscences of their visits to Godfrey’s. It is deeply disappointing that the recorder didn’t catch these chats.

I hung around for most of the rest of the evening’s concert but finally admitted that I had had enough. I headed up to the main gate, boarded the shuttle bus and drove home.

The Festival has been a ritual for many years, and even though I’m not a performer every year, I enjoy bumping into my fellow performers and friends of Godfrey’s on the grounds, catch some new bands and songwriters and be a part of the larger folk scene. But, I’d rather be playing there.