I was asked back to do the Music Monday slot on WFMZ-69 again. I’ve done it several times, the last one 4 years ago for my Playground release. It involves getting to the studio at 7 am, sitting around, doing a line check and then two short sets at 8:20 and 8:50 am. Eve Russo is in charge and we had an outline for both slots. We’d talk about Troubadour for the first one, emphasising the local players and the Godfrey’s book and my Lehigh Valley Music Awards for the second one. 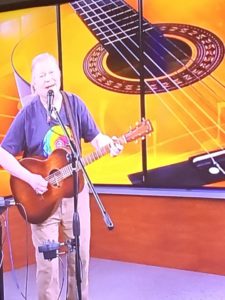 I spend some of the early hour changing strings on my Martin, and got through most of them. I was hoping I could pull the strings into place and settle the guitar into tune. Mixed results.

I picked Don’t Call Me Early in the Morning for the first set, appropriately, and it’s probably one I’ve done here before. It went well, though it’s strange to have three cameras to play to, so I simply gave up on trying to frame my attention on them. I was glad I was standing for these songs, even though my hip is getting worse. (One week to hip day!)

I hung out as Eve and Alex, the two women leading the broadcast, the weatherman and the traffic guy did their spots. There was a stage manager counting down the cuts as well as several folks behind the scenes running the audio and visuals. Lots of folks to put on a morning show. They did it well. There was a new sound stage as well. Pretty sophisticated production.

Prior to the last set I mentioned the No Place for Hate show I’m doing later in April and played Sally Rogers’ We Are Welcomed, a nice positive and simple folky tune. I could hear my guitar going out of tune (though had I checked it beforehand) and resorted to leaning on the bass strings that seemed to be in tune. It worked but it affected my approach in real time for the song. I covered it okay.

They needed a minute outtro so I did Barrelhouse Blues as the show faded to black. Done by 9 am.

Eve was appreciative, saying I made the spots easy. It was cool to see the Playground cover up on TV as they were promoting my sets. There were nice comments on Facebook as well, so folks were watching. I even went to the diner next door to Godfrey’s afterwards and one of the old vets I know on the street mentioned that he saw me on TV. Street cred. That’s all I’m looking for.