A musical friend of mine, Rudi Sefrin

, passed away in the last few weeks, and his friends threw a remembrance for him today at Godfrey’s. Rudi played on this very stage on Godfrey’s first night with his power trio of Ruff and Reddy, a great local band that played the bars when I was with the Shimersville Sheiks. Rudi, along with Reid Trevaskis and Jim Brekus, was a prolific pop-song writer who settled in the Lehigh Valley from his native Germany. (…something about not wanting to serve in the German army….)

Ruff and Reddy introduced me to the elegance of power pop, with their catchy changes, Reid’s nifty acoustic leads, Jim’s solid bass, their original songs and great obscure covers (Sneakin’ Sally Through the Alley) as well as their point-on vocal harmonies. At the time, I was in my folk/bluegrass purity stage, but, seeing and hearing them live, the band turned my ears around. It was natural to invite the band to play on Godfrey’s first night, along with The Sheiks, Mary Faith Rhoads, the first day of spring in 1976. 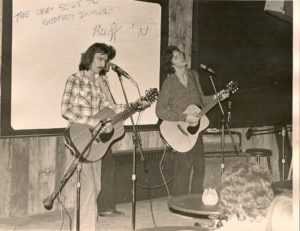 Eventually Reid left the band and helped me start up Steppin’ Out!, and Jim became the bass player after Reid left Steppin’ Out! (It’s complicated.) Rudi was pissed, and remained pissed at me forever. He would leave phone messages at Godfrey’s around GD Birthday shows, congratulating me for my successes with not-so-thinly veiled spite and bile. He blamed me for stealing Reid. It was upsetting.

Rudi had a very tough life, as he had to deal with MS and an alcoholic nature. But he continued to write songs, record them in his house with his best friend Jim, Sid Grossman and others in his circle. He sure could write a song.

I sat in the room today listening to Rudi and his music on the tapes playing on Jim’s home stereo brought in for the occasion, with Rudi’s ashes in a box on the stage. His friends and I traded tales of Rudi, talked about his damn cussedness and his prodigious output of music. But I cherish the moments when I able to take in his music alone with him, in this precious space, in this time. Rudi was a friend of mine. Zoot!