David Bromberg returned to Godfrey Daniels for a solo show on Sunday night, a gig he wanted to do on his way back from Albany on Saturday night. I remain amazed and gratified with his connection to the club, dating back to his first visit in 1985. He hadn’t been here since 1990, but had personally helped me out for my Band Aid benefit concert with John Gorka in 2013 at the IceHouse.

David rarely does solo shows, so they are very special in that he calls upon his folkie roots, playing blues and songs from some early songwriters as well as some of his own. Very special evenings. He pulled out, in particular, Delia and Mister Bo Jangles, songs that harken back to my very early days as a beginning folk musician.

In my early days at Lehigh in the late 60’s, I would travel back to the Albany area for the summer. I would hook up with my friend Dennis Mike, a fellow acoustic guitarist who would introduce me to Cafe Lena and Jerry Jeff Walker. Dennis played Jerry Jeff’s first album and I was amazed to hear leads on acoustic guitar (Beatles’ electric guitars, yes, but…), Sure enough, there was a skinny dude on the back cover with an acoustic guitar, David Bromberg. Imagine our surprise when we found out he was playing at our very local coffeehouse (The Bethlehem Coffeehouse) in Delmar, NY.

We were up front with twenty people or so. He was accompanied by a strange bass player with a leather aviator’s helmet on, feature by Dave as “The Flying Torpedoes”. He proceeded to blow us away with his flatpicking, fingerpicking and stage presence. We had never seen anyone like this before. Damn. He played Delia and I was thunderstruck with the simplicity and restraint in his rendition. 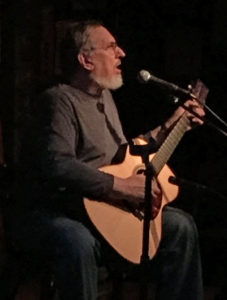 I tried valiantly to figure Delia out, bought a book with the tablature (another new device) and gradually found out that this  Rev. Gary Davis version wasn’t remotely the same as what I heard from Bromberg. This was not going to be easy to become a folksinger. But I persisted, learned it by ear, and I still pull it out on special occasions. David did a great version with some superb storytelling and it seems I still have some woodshedding to do.

As he was packing up, I thanked him for returning to room and pointed out his photo from 1986. He said, “A lot of my friends are on these walls.” Some deep connections here in this very special room. I think that’s why he came back, and why he helped me out when I was pretty low four years ago. He is a very special human being, as well as a world-class musician and folkie.

David led off the evening with this, “You know that you are in the last of the best, in this room.  There were  times when rooms similar to this were all over the United States. And there are still some of those old coffeehouses, some of them older than Godfrey Daniels, that are still in business, but they’re not the same. They’ve all expanded, got more modern spaces; they can bring more people in. They’re just not the same. They don’t have the history that is here, and that history counts.” Bang.