We’ve performed for this annual gathering on the Friday after Thanksgiving for about 4 or 5 years now, and I relish this opportunity to play with these friends, for the music and the camaraderie. The band played quite a bit back 35 years ago, back when the local music scene could support bar gigs during the week, weddings on the weekends and we developed a strong reputation as a country band that could rock and roll and swing while entertaining the folks with our humor on stage. 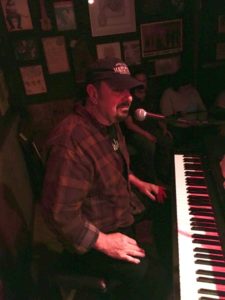 Well, we still do that. The Texas Swing material still kicks, Reid’s guitar is still nasty and he can still belt out the vocals. Chris Jones still plays steel regularly with a local country band, but Jeff (drums) and Hub (piano) only play occasionally. They alway rise to the occasion. Kris Kehr has done a great job taking over the bass duties when Denny kind of rusted out on the instrument, and Kris really does his homework on a lot of material we take for granted. I still play a lot so I’m primed and ready to go. 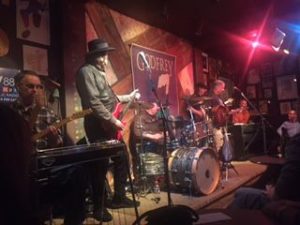 It has fallen to me to produce the show, writing setlists, gathering folks for rehearsals, etc. and take the responsibility for divvying up the material among all of us. The older material is solid and folks come out to hear the tunes, but it’s up to me to provide some new stuff on the menu and keep things fresh for us and the audience. The combination makes for a really good show.

Peggy Salvatore has joined us for a few songs at the beginning of the second set and tonight we worked up Rickie Lee Jones’ Chuck E’s in Love and Bonnie Raitt’s Give It Up or Let Me Go. I’ve been wanting to do Chuck E’s for a long time, and I’ve been working on my version of it. This was the perfect opportunity for me to really get it down. I almost nailed it, blew the last chord but caught it off my shoe strings. Give It Up rocked nicely. Peggy is singing more and it shows. She had fun.

We have some solid tunes to start out with and help us establish our cred from the get go, which is no small thing when we only do this once a year. Choo Choo, Zombie Jamboree and I’m Walking do just fine and we roll from there. Walking Stick (sans tango), Reid’s Dehlia was particularly manic with his Buzzy vocal conniptions, Hub’s solo Song for You, Jeff’s Old Cow Hand, and another raucous Red Neck Mother were highlights.

I’ve added False From True, Rosie is a Friend of Mine, Louise and Lessons from Pete to the roster this year and we did each one well, playing with our antennae up, looking for cues from me and listening hard. The audience appreciates the effort. Lessons came out very nicely. My friend Bill Hall did a multitrack tape and it should have some fine cuts on it.

The stage raps and comments were, as always, fresh, spontaneous and surprisingly funny. Part of the magic of the band has always been our repartee with the audience, finding places for asides without getting in each other’s way. Lots of chuckles tonight. 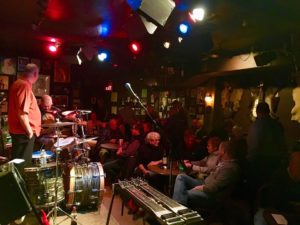 Though we were not as tight as we were back then (and we were extremely well rehearsed), we cover for each other and trust that we will pull the songs off well. We did, for the most part, and the audience was none the wiser for the small fluffs. Most of the comments after the show were, “That was fun.” That’s pretty good in my book. 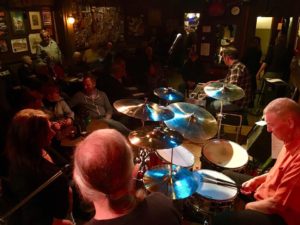 I am still amazed how tight we are as friends and we naturally fall into our grooves and roles on stage. We remain brothers and it shows on and off stage.