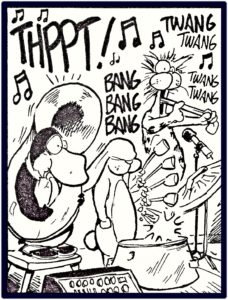 I haven’t had a lot of work this November but found some time to go to some local jams this week. I hosted the Godfrey’s Acoustic Blues Jam on Tuesday with only Cliff and Steve in the house, plus a few listeners. Surprisingly, we had a good time passing tunes around. Steve is especially fun to have in the house; he’s a fine harp player but also is a blues encyclopedia as well. He know the backstories of a lot of the obscure players, even some of the really obscure ones I dig up.

Wednesday was Andy Killcoyne’s Hot Acoustic Jam in Riegelsville, always a full house of players and listeners and I usually get an early slot. Tonight, I was hoping to get out “Chuck E’s in Love” as a solo for the first time, always a challenge to premier a song in front of a real audience. Andy chided me that it was supposed to be a jam, and that solo stuff was for Monday’s at the club. He was half kidding, so I said I’ll just do this one by myself. (Some songs have complicated bridges, like this one, and are not suitable for a jam). I pulled it off, and people were surprised to hear a pop tune from me. It was a good lift off for the song. Andy came up after it and proceeded to play the lick flawlessly (unlike my attempt) and I muttered a FU under my breath.

I finished up the three song set with Hey Bo Diddley and It’ll Be Me with lots of room for guitar and bass solos and it was appreciated.

Thursday night was my Emmaus Jam and there were only about 5 folks there, but we proceeded to pass around some good tunes. My friend and banjo player Tom sang a song for the first time in public ever. He messaged me later, “Hey Dave, I just want to say thanks for being involved in this Emmaus Jam. I’ve never sang in public before and tonight it was so easy to do it and I attribute that to you. Stick your head out the door, I think you’ll hear Pete Seeger saying “Well done Dave, you’re doing good.” . Thanks again.” That made it all worth it there.

The small gatherings are precious unto themselves.