The Sherman Theater is an old venue in Stroudsburg, PA and have opened a smaller venue next door as a showcase stage. Scott Judy has convinced the theater to start a children’s series every other Saturday, free admission, and I was the third act to appear. 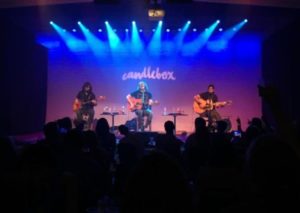 It started out slow but as 2 pm rolled around families started to show up and the folks had to round up more seats. Eventually the small space was filled. I’m not used to having successful family shows the first time around, so this was a good one.

I was lucky that they found some newspaper coverage during the week, and the folks running the series were not only surprised by the turnout, but enjoyed my ‘show’, my engagement with the audience and my professionality. The sound guy even ‘got it’ with my guitar work.

It felt good to drive home from the Poconos on a warm fall day. Money in the bank. Job well done.