It took a long time coming but I finally got violinist Nyke Van Wyk in the studio to put down tracks for the album. We lined up three cuts, the first being Louise, a fairly straight-ahead country tune. Nyke got a handle on it right away, was able to lay out for the piano and steel parts to come in and then add fills and rhythm chops as well as playing a fine lead. He is no stranger to the studio, being a producer himself, so he knew what to do.

Next up was Giant, a fairly different feel but he has Celtic sensibilities to go with his country ears. Again, fine work, supporting the strong melody while being able to play around it. There’s some great improv going on as well and was able to respond to the outtake of whistle and bodhran.

We finished up with Ten Men, a fairly aggressive ballad that has some anger in it. Nyke was able to attack the tune, play with emotion and give Kevin and myself plenty to work with. 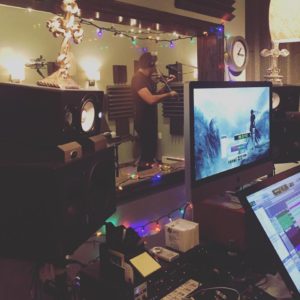 This project has been great, working with professionals who happen to be friends, as well. We’re getting to the end, with a couple of sessions with my “drunken friends” on The Crawl and some retakes on my vocals. It’s been a expansive experience to hear the songs rise from nothing into musical pieces of art.