This is the second big CMN conference I’ve been to, and I was looking forward to the adventure: some old friends, lots of new folks and a congregation of like-minded arts/educators. I also wanted to see where I fit in this particular niche. My past experience has been that there are some pros, some semi-pros and some new folk just exploring this field for the first time. It held to form and it was a nice experience.

The drive up from PA was easy for a Friday on I-95, and got there about 4 pm in time for registration. I checked in, and after a brief room snafu, I plunked down my stuff in a nice room overlooking a small golf course (it’s a resort facility in Hyannis, MA). The opening session was a group meeting and I started to see a few familiar faces from PA (David and Jenny and David) and Sally Rogers, soon to be feted on Sunday for the Magic Penny Award. The dinner was a good opportunity to meet folks from the NY and Mid-Atlantic regions.

Friday night featured the first Round Robin (open mike) and I signed up and got a middle of the pack slot. I was glad for that. The rules were: come up, introduce yourself and the song and play it, no longer than 3 minutes. Again, I was glad that I could do it because I’ve done it before at showcases and some TV and radio gigs.

Here’s where it gets curious. Not everyone at this conference is a professional stage player. Lots of folks here write songs, play libraries, teach in schools, etc. So it was nice to see the “players” in action, and then abide the others in their efforts. The sound crew was fairly scattered, though, and didn’t help the new folks settle in comfortably. When it came my time, I said, “Give me two mikes and let’s go.”

I came up to do Giants and one over-exuberant woman shouted out, “He’s famous!” I blew a few kisses, said, “Calm down” and launched into the song. I pretty much nailed it, the quick audience picked up on the spooky sounds and the call and response, I did a mouth trombone lead and let the audience do one themselves (marvelous) and I finished strong. I bowed and walked off stage. 3 minutes, baby!

I had made my statement early in the weekend, and over the course of the convention, got lots of compliments and respect from my peers. That opened up some doors with most of the folks I connected with. It also made my return appreciation of their sets mean something to them. I sought out those who were the pros who could deliver their material succinctly and in a timely fashion. I made some new friends.

I went to several of the workshops, though most were heavily into the “change the world” efforts, and though that laudable, it remains somewhat outside my philosophy.

The first session on Saturday was the Finger Play workshop, and I was looking forward to this one. I got to the room early with my guitar and had a chance to play some music and connect with myself in the quiet before the storm. As folks started to arrive I started to put my guitar away when the workshop leader came in and told me to put the guitar away, no guitars allowed and succinctly established her territory. I said that I knew that, but had wanted to play something before the session. As I put my guitar away, I mumbled a quiet “FU” which she may have picked up on…. Oh, well. I then asked if we could do ‘movement’ songs, and she quite firmly clamped down on that idea. Fingers only! Sheesh.

So, as we started out the round robin of finger tunes, I figured I would do Finger in the Air, a Woody Guthrie song from Playground, and I was a little rough in getting the verses straight, as the woman next to me was familiar with the song, singing along and giving me no space to do my version. It threw me off my game. As I hesitated before the last verse, the headmistress gave me a rattle shake she used to clamp down on folks going on too long. I quickly did the last verse. It silently pissed me off.  (I was the only one ‘rattled’ during the session.)

I eventually did Peanut Butter and Jelly later on during the circle and it was fine.

I realized that there are various factions here, including some children’s music purists. As in many musical circles, we differ in how we present our music. Welcome to the club.

The Saturday afternoon Keynote presentation featured Ken Whiteley, a Canadian performer, producer and one-time Godfrey’s act. His talk was based on crossroads, and being open to each other when we meet at them. He had produced Raffi before he was Raffi, as well as over 150 other folks acts on the circuit. He has a deft ear for the business, including getting the most out of a performer, the song and still be affordable. It was a fine philosophical jaunt through our folk music lives.

I came up during the Round Robin and reintroduced myself (my middle name is Whiteley) and connected to the time when he played Godfrey’s, the only gig he got from an early NERFA festival in Philly. I had booked him then. He actually asked me about my health (he had had some very serious problems a while ago). Somehow the word gets out on the circuit, proving the amount of caring that goes on among folkies.

The Saturday evening Round Robin had 40 folks signed up and eventually turned into a four hour event. I could only take so much, was glad to hear some of my new friends play and catch Bill Harley and some other pros.

There was a Sunday workshop on making a difference with kids. I got there late and sat in the back. Lots of anti- bullying songs, etc. I felt that I had little to offer. Eventually, one fellow offered a space to me and I tried to think of what I could play. I settled into to circle and admitted that I have no songs of redeeming social value but try to focus on empowerment.

I decided to do Rosalie, Where are You Going. I led it off and got two other fellows to demonstrate. It worked well, but I didn’t heed my own advice and did one too many verses. I got caught up in the performance. Lesson learned on my part.

The Magic Penny Award is given to folk who truly excel in Children’s Music. A couple of years ago it was given to Ruth Pelham, a woman I did not know but came to appreciate her work in my home town of Albany. We became friends back then. Other folk honored are Pete Seeger, Malvina Reynolds, Bill Harley., Tom Chapin, etc.

This year’s recipient is Sally Rogers, a woman I’ve known through her visits to Godfrey’s as a solo and with 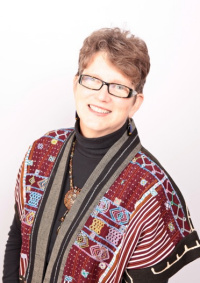 Claudia Schmidt as well as her living legend as an arts educator and children’s music studio artist. (When I applied for Young Audiences of CT in 2001, I found out that she was the “folkie” on the roster. Dead end for me, and quite understandable.)

The ceremony featured some great plaudits from other kids’ performers, school principals, etc, several nice You Tube cuts of kids singing her songs. A special moment for me came when my friend Claudia Schmidt came up to do some music with Sally. Sally then did some tunes with the audience, her family and the very responsive audience. A marvelous ending to a good weekend of friendships and the deep commonality of children’s music.

The ride home was good until I got into CT on I-95 through the GW Bridge. What was a 5.5 hour drive on Friday became a 7.5 drive to home. I got back for the Godfrey’s open mike but found myself exhausted.

It was a good experience, I learned some new things, met some fellow children’s music travelers, knocked my one 3 minute song out of the park and saw the ocean briefly. It was worth the trip.