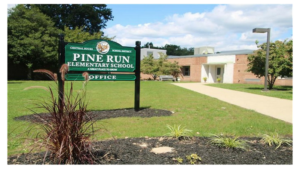 I returned to Pine Run ES in New Britain, PA for two assemblies on Wednesday morning. I played here a long time ago and as I was welcomed back, one teacher reminded me that I had done a songwriting residency here back in 1996. We had written two songs A Day at Pine Run and Pine Run 2021 and the school had put the cassette of these songs in a time capsule that was opened just last year after 25 years. (They couldn’t find a cassette player to play it…. I said it was like the CD’s I had with me today.)

I had a great chat with the custodian about guitars, etc. (how many custodians I meet are musicians?!) I set up in the gym and waited for the fun to begin. It’s been a while since I’ve done a solo show, so I was scratching my head on what to do, but trusted my instincts.

Both shows went well as I rattled off I Like Peanut Butter, Tutti Tah, We Gave Names, Down By the Bay, Giants and All Around the Kitchen. The response was great.

I brought my mandolin with me on this one and used it to “go mobile” (no mikes and wander the crowd), break the plane, as they say, for Down By the Bay. As we made up rhymes, it was a good device to engage the whole audience (including the 6th graders!). I eventually pit one side of teachers to come up with animals for the other rank of teachers, and the back and forth between them proves to be a gas, with the students invested as well. The process proves to be electric.

It’s always a challenge to engage the older classes and the teacher who booked me made a point of thanking the sixth grade for “modelling” good behavior by staying involved, to make an example for the younger students. I backed her up on that, and the kids actually did it. As I told the custodian as we headed out to my car at the end, I often have a chip on my shoulder when the older kids get an attitude and I react in kind. I recognize this tendency and try to reign myself in, in spite of myself. Today, the good vibes were evident.

As I’m doing these days, at the end of the show, I asked the teachers what they like about the show. This also models for the students positive feedback of what just happened as a community and adults having a conversation. It also reinforces the concepts I foster as a Teaching Artist. Things came up like: rhyming, having fun, dancing as a community, creativity, laughter, and I like to follow up with, how rare these opportunities are for a school community. A very rich moment for us all.

I wonder what those old Pine Run songs sound like? I wish I had a copy of them, twenty five years later.