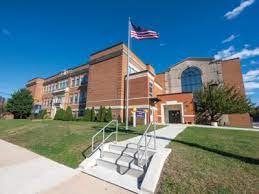 This was a long haul, and I had my reservations about dragging the lads down the shore for this one. It turned out to be worth the trip. We were in Tuckerton ES about 2 plus hours from home, but I’m not too concerned with my time on the road these days. Still, I left home about 5:45 for a 9:30 and 10:30 set of assemblies.

I got into to town early enough to go take a brief glimpse of some shoreline smells and vistas. Gulls….. I got back to the school to check in and the staff were most accommodating. We set up on the gym floor. Kevin and Nick hit some traffic but the school was flexible enough for us to start ~ 15 minutes late. 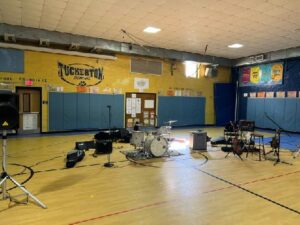 The first show was for the little kids (K-3) and it moved quickly with kids up and dancing right away – a good sign. I decided to pare down the edu-speak and keep it moving. Kevin commented that that was a good thing. We played a fairly short set.

The second set was for the older kids (4-6) and they were really responsive as well. A small boy in the front row was up and dancing right away – and he was busting moves like you wouldn’t believe and gathered a lot of attention from his class mates. It was very cool that the teachers let the kids react the way they did. Remarkable, but indicative of a small town elementary school. As we finished out the set with Rock and Roll Music, I invited that kid and his friend to come up and dance in front of the band. It was the perfect way to end the show. Sometimes I surprise myself with my instincts.

I got back home around 2 pm, so it was a very long day on the road with two shows thrown in. Still, it was a good gig; the school loved the show and the band gets paid.