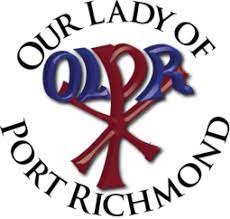 RockRoots had two NE Philly gigs this week, and there’s no direct route to these interesting neighborhoods. Our Wednesday afternoon gig was at Our Lady of Port Jefferson, in a fairly tightly-packed neighborhood. We were lucky to find some parking to unload out front, but latter gained access from the walled parking lot near the stage exit. Whew. 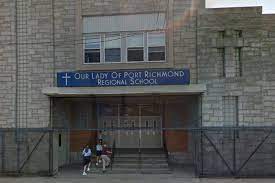 We loaded in and set up on the stage for the ~300 K – 8th graders. The kids were polite, though the 6th, 7th and 8th graders were a bit remote, no dancing or getting out of the chairs. One bright spot was a special needs 8th grade boy who surprised us all early in the show when he demonstrated the Irish jig. Not too shabby, neither.

The principal / nun was quite glad to have us, and we benefitted from an opening prayer. Perhaps she though we would need it. As usual, we played well, cleaning up the small stuff after our long sabbatical. The kindergarteners were great dancers, and the music teacher came up afterwards and thanked us for the show, as we thanked her for dedication to spread music in several school communities in North Philly. Not an easy job.

The ride home reminded me of our early RR gigs in Philly – afternoon traffic on the Schuylkill!

Friday’s gig was another NE Philly school Holy Innocents with a slightly smaller audience of 150 4 – 8th graders. This neighborhood was a little more spread out: I could see lots of sky today. And we were able to load in from near the stage. (We have to plan our escapes very carefully) This was held in a big gym, and since the group was smaller, we like to eschew the stage and play on floor with the kids.

The kids were mostly Latino in this neighborhood, and had taken in a Roots of Latin Music assembly the week before. Thus, the older kids were polite but a little removed. That’s why we have Kevin…. our secret ingredient.

The trip back was a tad more arduous – Friday afternoon, of course, I was pretty whipped when I got back to Fourth Street. Still, it’s great to be out there with RockRoots.