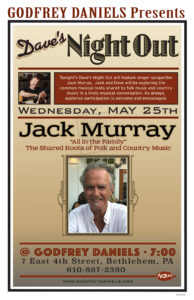 I was a little bushed from a RockRoots doubleheader in the morning, but had some time to recompose for Wednesday’s Dave’s Night Out with my friend Jack Murray. We figured we’d explore the space between Country Music and Folk Music, and it turned out to be very good topic. Jack has a mind and a gift for exposition on stuff like this so he came armed for bear with a great list of songs, and I put some thought into it as well. The conversation was easy between Jack, myself and the audience.

I found out that Mike Duck is helping to sponsor this series by doing sound for free for mention of his Web Foot Digital web-building business. Big thanks, Mike!

Jack brought out Four Strong Winds, Last Thing On My Mind, If I Were A Carpenter, Irene Goodnight, Long Black Veil, and Girl From Mexico, a song from Ramona’s dad. Jack gave up early on that one, but I insisted on him reciting it. It turned out to be quite wonderful and I hope he does it again as spoken word. There’s power in that medium.

We were able to mark important shifts in the folk/country continuum like, the Dylan/Cash duet on TV, The Byrds Sweetheart of the Rodeo, the Will The Circle Be Unbroken album, Woody and Leadbelly’s Goodnight Irene, Tom Paxton, etc.

There were a few more in the audience, breaking into double figures for a change. I really am proud of this series for the content and the way it is delivered on this historic stage. Tonight was a perfect example. Thanks, Jack.