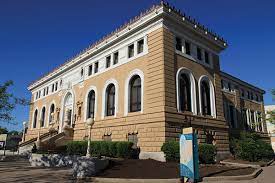 I had booked this gig a long time ago, and, at one point during the pandemic, I was going to do this online. But, in the spring, the events coordinator Jeff Cupo decided to try it live in the library and also broadcast it online to the library’s audience.

I got there in the nick of time, walked in with my guitar and mandolin and was escorted to a large room on the 4th floor. Confident that there wasn’t going to be a big audience, I’m glad I didn’t haul my sound system in with me.

Again, it was a strange gig. I set up on a stage in the room facing chairs socially distanced about 6 feet apart. So much for a nice, cozy fire-side music session. As it turned out, there were only five folks who showed up, along with Jeff and library guard in this cavernous room. A small lap top was set up to my right that broadcast my session.

I was asked to do a general folk music show, so off I went, mixing up my material, chatting about the songs, folk music in general and my strange life as a traveling musician. Any attempt to sing along was futile, especially with masks and the spaces in between folks. I thanked folks for coming out and said that it was especially hard for them in this situation, but I appreciated their presence. I did about 50 minutes, finished with We Are Welcomed.

One gent came up and said that he remembered me from a RockRoots that we did there years ago (I had no recollection of the gig), recognized my name and made a point to come out to see me. That was particularly interesting. And, as I exited the building, two of the ladies thanked me for the show and that they really enjoyed it. Again, that made it all worth the three hours of travel to Elizabeth and back. Jeff would like to have me back for the children’s library, too.

This old classic building was built a century ago by funds from Andrew Carnegie. Apparently, this captain of industry funded many libraries during the early part of last century, part of his vast philanthropic endeavors. Good for him.