This one was on the books for six months or so when Craig asked me to join Dick Boak, Cliff Starkey and him for a concert benefitting the Nazareth Library. It was held in a large hall at a local Catholic parish, complete with a bar (small, small glasses of wine, apparently) and tickets were steep ($35) for some folks. But, it was sold out and the audience was appreciative and listening. I had fun with them.

Dick started out with a short set of his originals on autoharp while Craig backed him up on guitar. Dick was pretty nervous, but, as usual, he pulled it off in fine style. I was up next. 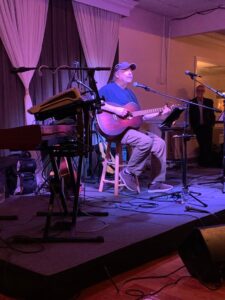 asked for a 20 minute set so I lined up 4 songs: Don’t Call Be Early, Giants, Branching Out and Lessons from Pete.

Don’t Call Me Early is a great opener because it’s strong on guitar, has a chorus and sounds traditional. It also gives me a clue as to how the audience is going to sing along, or, at least, open up my expectations for them to sing.

Giants gives them no choice but to participate. Since there were six sections of seating, I experimented with having each section contribute their spooky sounds and it was a good way for the audience to hear what the rest of the crowd was doing. A little competition never hurts. It went well.

I threw in John Gorka’s Branching Out next. It’s got a sing-along part that’s easy (call and response) as well as some of John’s sly and clever songwriting. It’s a gentle and warm song, and philosophically true for me.

I invited Craig up to finish with Lessons From Pete, and, with a tip of the hat to Pete Seeger, Craig and I pulled it off nicely, with Craig nailing the final lead which got some applause. It was one of the better times we’ve done it. It’s a pleasure to have him compliment me on this song.

Craig and Cliff followed with their set and I got a good chance to hear them as a duo. Cliff’s got great chops on piano and vocals. And then all four of us finished out the night with three songs. Surprisingly, my choice of We Are Welcomed turned out to be the finale. Craig’s familiar with it, not so much Cliff and Dick due to its modal sound, so I laid it out with my guitar and vocals. It was a good way to end the evening, and we got a standing O. Sometimes, I don’t take a second to take these moments in; I’m always a little embarrassed.

I sold some CDs afterward and got to chat with the folks, many of whom talked about their kids listening to my music some 30 years ago. I gave away some of my Peanut Butter CD’s to them to give these kids a Christmas present.

It was a long gig, with set up at 4:30 and breakdown until 10:15. I was beat. Craig’s the one who really stepped up though, due to his recovering from some serious chest surgery in the last month. He is a wonderful friend and a great player. It was nice to play for his supportive audience again.