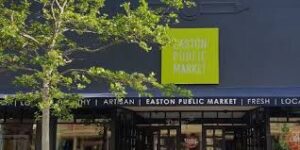 The Easton Public Market is an interesting place. It’s a large old building with old wooden floors, tall ceiling and vendors wrapping around a central row of more vendors. Lots of interesting stalls, food vendors, etc. with tables and chairs for folks to hang out and eat. It’s quite a novel arena.  I only get to do gig only this a couple times a year. The last time was on the back landing overlooking some tables, due to the Covid protocols, and this time it was inside the market. 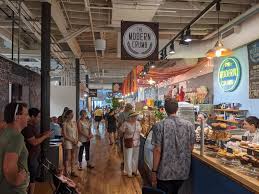 I was set up near the rear entrance facing one pizza vendor with a dining area off to my left. It was a weird set up with little connection with the “audience”. I was booked from 6 – 8 pm. There was a good influx of folks ordering food, drinking beer, etc. and enjoying a Friday night out on the town. 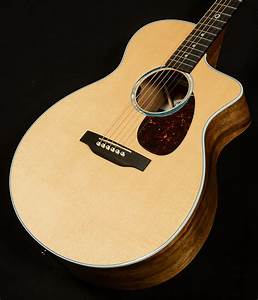 I finally had a chance to try out my new SC13E Martin through my small sound system and it was a rocking start. As I found out, the tuner installed in the guitar, when switched on, deadens the output to the sound system. So, as I was setting up, I though that my guitar chord was screwed up. I eventually figure it our, but not before doing some last minute sweating. I also had some adjusting to the volume and tone knobs inside the sound hole, adjust the amp. Anyway, I got started and worked on my sound on the fly.

There were a few folks who came to hear me, which was welcome and I got some applause after each song, though from off in the distance. I played well, though I was still trying to gauge the new guitar’s personality. It has koa wood sides and back, a spruce top, and it’s still pretty stiff, sound-wise, though fairly easy to play. It will be a work in progress.

Folks thinned out at after 7:30, which was good. I was getting fatigued dealing with the circumstances, packed up my stuff and about $45 in tips (not too shabby), and headed back to Bethlehem. It was a tough gig, but it paid well enough, and I learned a whole lot about my new guitar in the process.