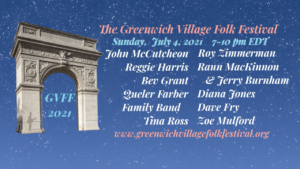 It was an honor to be asked to be part of this monthly Zoom concert. I have a few connections with the songwriters in the NY scene, namely Rod MacDonald and Christine Lavin, but I also thought that they were running out of songwriters to feature. I still feel like an outlier with this songwriter niche, in spite of my rather extensive relationship with it as a radio and folk club promoter. But, I’ll take it.

I was particularly please to see that Reggie Harris and John McCutcheon were going to be part of it, and I had some familiarity with a few others on the bill. Christine Lavin introduced me and Ron Orlesko chatted with me at the end. I was glad that they mentioned my 365 pandemic project, my kids’ work and my radio shows. Ron and Christine were welcome connections in introducing me to this group.

I was slated third, and I was fine with that. I could do my set early and then take in the rest of the evening. I did have several sound checks with Brian, the techie, and we went back and forth with what used to be fairly straight forward. We monkeyed around with the camera sound, my amp sound, positioning of the guitar, etc. and, somehow, it seemed to be not up to snuff. Perhaps I should have used the Focusrite box set up that I had given up on months ago. Zoom is never a sure thing.

I did Don’t Call Me Early, Giants and Lessons from Pete, and pretty much nailed them (if the sound was good…). It seemed that the folks in the Zoom Room enjoyed the set, and I surprised some of the folks unfamiliar with me. I got some nice compliments from John (“Solid set, as usual”) and Reggie (“You belong here”) as well as from Ron and a few others. The smiles from the Zoom grid was quite welcome.

Reggie, Roy Zimmerman, Zoe Mulford and, of course, John McCutcheon did outstanding sets with powerful original songs, often connecting directly with the 4th of July. I was in some powerful company. John is particularly brilliant.

Still, I was the only one doing some non-original music, though I think I held down an important part of the evening – a strong performance on a folk stage. I guess that’s where I felt I added to the evening. I’ll take it.