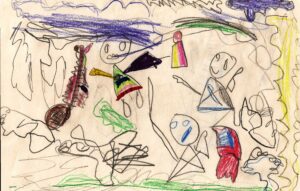 An appropriate drawing of how it felt on our first gig back in 18 months.

This was our first RockRoots in a year and a half. We were booked for a library camp program held in the gym of the local school for about 120 kids (k-6) and about 25 teen counselors and two librarians. It was a brutally hot day in July and we were thankful for the AC, for sure.

As usual, it was the usual 1.5 hour commute from PA and, of course, Nick and Wayne had faulty GPS help, but, again, of course, we started on time at 10 am. I was glad I checked out the PA (also sitting in moth balls for 18 months) and things were working. Now, all I had to worry about was remembering the show and adding a few wrinkles I had worked up.

I decided to sit down for this one. My asthma is high and stamina low and that was a good idea. The format and most of the script flowed well, to my surprise, and the show moved well, thanks to the lads being professionals.

I added a couple non-history songs for this one, breaking up the show somewhat, but I think the situation was appropriate and helped out the attention spans of the kids. I put in We Gave Names to the Animals that was fun and provided some give and take with the kids (and librarians love the rhyme-play). Later on, I threw in Giants just for fun. And, at the end, we did All Around the Kitchen that was a riot.

Through out the show, I tried to engage the counselors, who, without fail, don’t what to get involved. But, thanks to a few who understand their role in interacting with the kids, they came around at the end.

All Around the Kitchen gives the kids a chance to show off their dance moves and then I brought up 5 councellors to show us their moves. I had also asked the counselors sitting on the side to come down and dance with their kids. All in all, it was a great unifying event to finish off the show. It worked.

The band did well in spite of a few key difficulties and appreciated the new material. It was a long drive back and it made for a long day. I find myself pretty exhausted from the gig, but I’m glad we got the band together again and re-inflated the show.