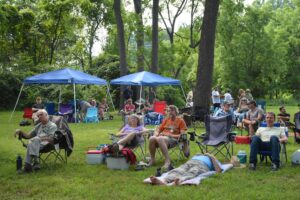 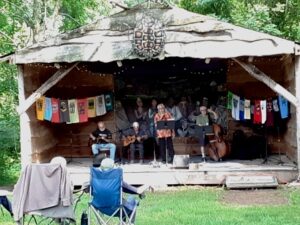 After I wrapped up my Food Co-op gig in Bethlehem, I headed out to one of my favorite summer gigs, Father Folk in the hills south of Reading in Berks County. This is an annual, word-of-mouth gathering of a tribe who love acoustic music and runs a small festival of friends for a weekend. There is camping and a small grove with a very nice stage and sound system. I’ve been playing this one for ten years, I guess, and love being part of this event. The audience is very appreciative, close to Philly Folk Festival quality (though much, much smaller), and am challenged to do my best half-hour set. I particularly love the drive out to this part of PA, as well. 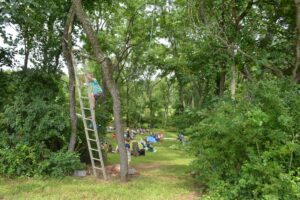 The other players are mostly semi-pro and enjoy playing on a real stage with real sound. Every one steps up, though, and does their good stuff. I think that is what makes this event special. No stars. I was up for the 3:30 slot and got there in plenty of time to settle in, catch a couple of the other acts. I met my good friend Nick Peetros shortly upon my arrival; he had played earlier with Cliff Stackonis. I immediately asked him to sit in. Yeah! Nick is a world-class harmonica player (chromatic, too) with no fear in accompanying people, and we’ve played together many times over the years. This was going to be good. 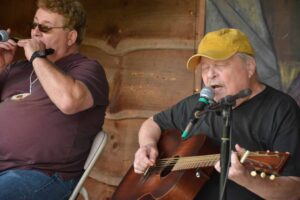 Don’t Call Me Early, July, Giant, Rosie is a Friend of Mine, and Lessons from Pete.

I was feeling a little hoarse from my earlier gig with the food trucks, so I struggled a little. I also found my left hand cramping up from fatigue and the heat, so I was dealing with shaking it out, all while trying to get the songs right. I was particularly glad to have Nick on board. I was able to have him take some leads and stretch the songs a little. He was great and I know the audience was eating it up. The interplay between us was good theater and I knew Nick knew when not to play, a rare attribute for a harp player.

Interestingly, I muffed the words to Lessons from Pete but managed to pull it off. Again, thanks to Nick, it had its moments. Still, I was struggling with a long day on the road, the previous gig, fatigue and a new situation with someone not familar with my material. All in all, it was a professional set of music in a meaningful arena, and folks liked it. I sold a couple of Troubadour CD’s, too!