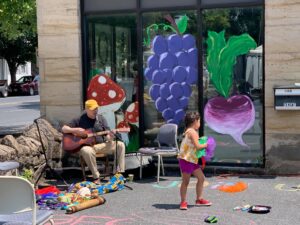 My local food c0-0p will be moving into a large, former car dealership on the Northside of town and I was asked to perform for a couple of hours as the aging hippies gathered in the parking lot. There were some food trucks near by, our local ice cream vendor and a DJ at hand and a tented area for folks to sit and eat. I found a nook in the shade, set up my small sound system and set in to playing. I put out my bag o’ instruments and started to troll.

Many familiar faces and some folks were listening from the tent. No problem that no one was nearby. It’s all about the ambience. Eventually, several moms, dads and kids made their way over to the shakers and I had my connections in gear. 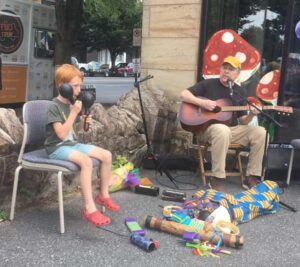 One lad sat next to me and was working the maracas. He was really getting into it and was coming up with some rather sophisticated moves. I opened up some spaces for him to extemporize and got him to count off the start to a song. He really nailed it, and, later, his dad said that he does have a gift for music. Another young girl took to the scarves and lost herself in dance. Again, her dad expressed some surprise with her ease in movement. 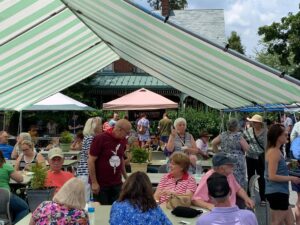 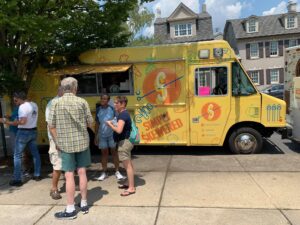 The bugger of the gig was the fact that I was set up next to the food trucks which were running their engines during my set, a constant rumble and an air of gasoline for the whole time. I was glad I had my PA, but it was cranked up more than usual. It took a toll on my voice later that afternoon at Father Folk.

It was a good gig and much appreciated by the organic crowd. When the sun moved overhead, I packed it in a little early and I was grateful to get a head start out to Berks County.