Some gigs are starting to come in, and this was one of the first that landed in my lap this spring, before there was any sign of the clouds parting in the pandemic. I have a friend Lisa who has booked me consistently in the parks system in Spring Township outside of Reading. The date came around on a perfect late spring night. Clear skies and low 70’s.

I was in West Lawn Park, a semi-urban setting and a new one for me. There was a nice small stage overlooking a paved area and a playground in the back. Folks set up chairs and blankets in front of the stage and it was a nice mix of grandparents, parents and kids. I set up my small PA system for this one, and it worked well. 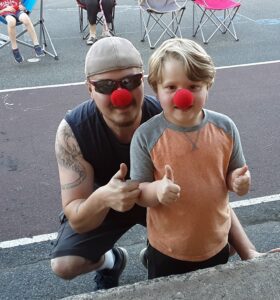 As folks settled in, I got out some of the foam noses to play with the kids and dads, breaking the men into this situation. The men are the hardest to loosen up and this works really well. 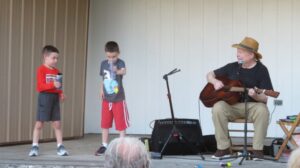 I started out with I Like Peanut Butter, Tutti Tah, I Wanna Be a Dog. It’s been a while since I’ve done a set live, so I was feeling my way. I broke out the rhythm instruments for Skip To My Lou and Shoo That Fly, broke out the scarves for Jelly in the Dish, and the bag of animal puppets for We Gave Names to the Animals. This progression of interactive tools worked quite well tonight and the playground was hoppin’! 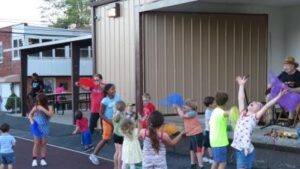 I had a particularly nice interaction with a Latina grandmother whose tween granddaughter was having a good time. The elder woman wanted in on the tambourines, the scarves and the shakers and I made sure she knew I appreciated her energy. At the end of the night, at the edge of the stage, I blew her a kiss, and she responded with a hugging motion. So sweet and it made my evening.

The evening went really well and the parks and rec folks were quite pleased. I was paid better than any gig in the last year and I got my legs under me once again.

It was an hour’s drive to and fro, and I must admit I have missed my time on the road.