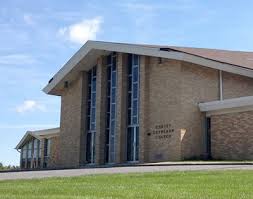 This was my annual summer Sunday service at this nice church in Hellertown and this was a special one since it was only their second “in house” service. Few masks and many familiar faces. Pastor Phil is a very welcoming minister and I’m glad he likes to engage me in ceremonies.

I picked out some joyful tunes, and, though not specifically religious, good, uplifting songs. Prelude: I Can See Clearly Now / Here Comes the Sun medley, Welcoming Song: We Are Welcomed (of course), Message Song: Turn, Turn Turn, Final Hymn: Get Together and the Postlude: Lean On Me.

Pastor Phil asked me early on about my religious upbringing so I talked about growing up at First Presbyterian in Albany, and my brief interest in becoming a minister. I then mentioned my recent UU roots. Curious that he inquired, but I’m amongst friends. 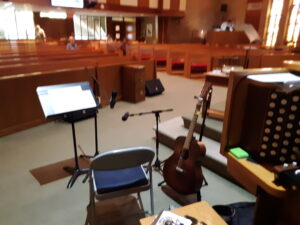 The theme was the parable of the mustard seed, planting in good soil. When we came around to Pete Seeger’s Turn, Turn, Turn, I reflected on Pete’s planting his mustard seed in me, setting me off on my voyage getting kids (and adults) to sing. I reflected on the card I got from a student: “You give me the courage to sing in front of people.” It’s now my job to play mustard seeds in a new generation of children.

I politely hammered the congregation to sing along, often dropping out in order to hear their voices. A noble effort; I even asked them to sing like they were Baptists. But, they remained fairly shy. That was part of my message.

It was great to play in this large wooden space in front of loving people again. The joy was there.