I had my second virtual assembly program on Thursday morning through Young Audiences of NJ. This was for Valley View ES in Califon, NJ, a school I believe I’ve played live with RockRoots in the past. It was slated for 300 in-school kids (K-4) and assorted children tuning in remotely. 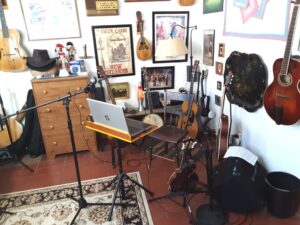 This was my first using the OSB studio and posting to Vimeo for the school. It’s been a steep learning curve that started last October with YANJ and, finally, I was putting my boots on the ground here in April. I was lucky to have a session with Chris, the tech guy at YA earlier in the week, so I was fairly confident that things were in order – but ya never know…. It does occupy my mind.

The OBS system sets up scenes for each song, so I can put a graphics, lyrics, etc. up for the kids. I also developed three videos for guitar, banjo and mandolin that came off nicely and was able to play those in the flow of the show. My camera and the built-in mike work well and I’m glad I got a good one awhile ago. I decided to skip the green screen for now. Perhaps I’ll work that back in later on.

I wasn’t sure if everyone would be remote, but I found out the day before that most of the kids were physically in school. The school wanted a “chat” available and I looked forward to working with that aspect. As it turns out, with only a few kids online at home, the chat was pretty much limited to the teachers, the librarian and a few kids at home. They were chirping along until the librarian texted that those kids should treat their comments like talking during a performance. Such is the state of these sessions. Still, it was interesting.

As I finished out the show, one home-schooler kept texting, ‘no’, ‘no’, ‘no’. He wanted more, so I texted him that I was glad he had a good time. He texted back, “Okay.’ So that was cool.

The school enjoyed the show: “I just wanted to reach out personally and let you know how thrilled our staff and students were with both Cello Fury and Dave Fry!  I was apprehensive about the virtual setting but it has been awesome!” It’s a good thing when it works out.

It was a lot of work to put together the tech, but I don’t mind the details; I realized that once I was in performance, I was in my element, doing what I do best – interacting with the ether and the little white dot on the camera. A leap of faith, but it’s in my wheelhouse.

I found that I was exhausted the rest of the afternoon, though. Even though there’s no travel, it remains an intense performing session. It’s good to have this one under my belt.