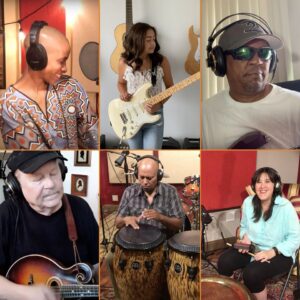 After a postponement on Thursday (it never really did rain), we went for it on Friday night. Billed as Songs of Resistance and Hope, it was an effort to premier the video Lehigh Valley Be Free, a monumental project by my friend Mike Duck and the Lehigh Valley Song Project, gathering many musicians from the LV to add their talents to the video. I added some mandolin to the effort. It came out quite nicely. They showed it at the end of the evening.

I was asked to play four or five songs during the evening which I gladly jumped in. I asked Kevin Soffera if he would join me, and, since he played drums on the video track, he was into it, as well. 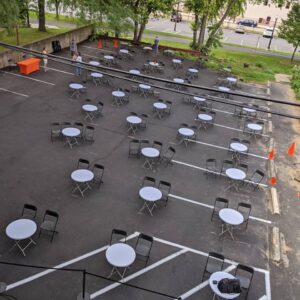 Since an indoors production was out of the question, the Touchstone folks turned the back balcony into a stage with distanced seating in the back parking lot. As it turned out, it was a fine acoustic space looking out over the Greenway on a pleasant Friday evening.  A sliver of a moon appeared in the west after the sun went down. 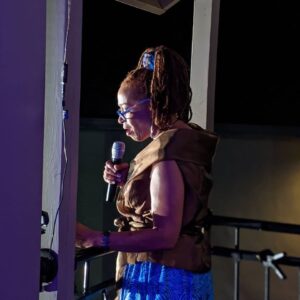 Local poets, rappers and a dixieland trio provided entertainment and Kevin and I came on towards the end. It was a cool stage, even though removed from the audience. Nice lights and good sound. 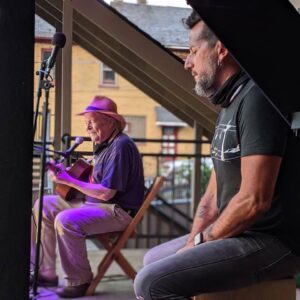 I picked out I Can See Clearly Now, Here Comes the Sun, John Martyn’s May You Never, threw in Rosie is a Friend of Mine and finished with We Are Welcomed. I thought I was warmed up for the set, but, as usual, I was a little ham-handed on guitar and a little flat on on the vocals. The spotlight still affects me, but I played strong and it was great to have Kevin riding shotgun. It could have been better but we pulled it off by being strong on stage.

Kevin and I retired to the parking lot for the video, and, after a three song video from a young girl and futzing with the projector, they showed the video for the first time. It was a treat to see all these friends and new folks on the screen. Good sound and production. I was gratified.

The video is now making its rounds on social media:  http://touchstone.org/LVBFREE

I was pleased to be asked, I actually got paid for my set, and spent some time out in public again. My friend Mike Duck established himself in the arts scene, and I am so proud of him.