I had my second gig in the barnyard at Camel’s Hump Farm in North Bethlehem on Sunday in the late afternoon. It’s a good space for me to emerge from lock-down and an opportunity to get used to playing with and for a live audience. Per usual, there were only a few folks there, but bolstered by some friends coming for the open mike after me with Bill Medei. Regardless, I enjoyed the challenge.

There were no kids in sight, so I was able to concentrate on my adult stuff. Early on, I did repeat a verse on July, took a note and moved on. From then on, I had a pretty good grasp of my material and I chalk that up to the amount of playing I’m doing with my daily Kitchen Sessions. That’s proof that the discipline that I’m sticking with (including my exercise and diet work) is working out.

One of the open mikers, Ian Cunningham, showed up early with a saxophone so I invited him, unheard, to find some spots to jump in. It turned out to be a great part of my set. Ian had ears and the good sense to find those spots and, together, we created a wonderful dialogue that added tremendously to the performance value. Sound-wise, his separation from my amp/mike/guitar provided a three-dimensional aspect to this small acoustic space. It made for some magic I could call on through out the hour. 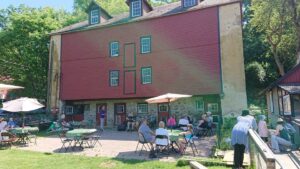 I started with St. James Infirmary for no particular reason but be came a good vehicle with the dynamics I use. Ian was putting his sax together and, at the end, came around to do a nice solo. A nice tension … will he make it?  is he good? All answered.

Ian did a great improv during Giant, Stan Roger’s “Celtic” tune, and showed his ability to play outside of a jazz genre. He, of course, nailed Chuck Berry’s Nadine.

I finished up with Pay Bo Diddley, and, seeing how the bag of maracas was still intact (no kids) I figured to break them  out for this little Bo Diddley excursion. Ian stepped up with a nice sax solo. I’ve been adding a subtle descending harmonics riff as a solo, something I picked up from guitarist Richard Leo Johnson, but it provided a space for everyone to maraca away. Again, the court yard sounded great.

I hope I can do it again next month.

It’s still a little weird to have such a small audience, only increased by the open mikers showing up for the open mike after my show. I try to rationalize it as setting a bar for them and I do get the feeling that some of them really appreciate my set, and not just waiting me out. At least, that’s story and I’m sticking to it.