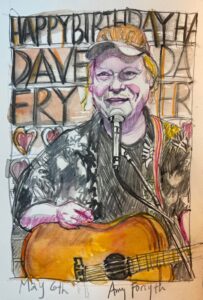 That’s saying something, though there have been plenty boring ones, especially recently.

I was played, to a certain extent, buy my sister Janet and friend Ramona behind the scenes and it didn’t really sink in until about 2:30 am a day and a half later. I was quite amazed by videos folks had been sending me and I was quite touched by each one. And, with so much time alone these days, I had the opportunity to savor each one.

It was all a scam. Janet and Ramona were planning a big 70th party, at the IceHouse perhaps, but COVID-19 got in the way. I had no idea. So, instead, they reached out to folks to get in touch, and beyond daughter Rosalie, son Jaimie and sister Janet, I expected their calls, and planned on staying away from FB. Frankly, I am not familiar with a lot of the folks who post birthday messages. In the past, I kind of enjoyed it, but when it gets above 400, no thanks.

But I was taken by videos this year, some with some sophisticated music involved. Saxophone, bunch of fine guitarists, two accordians!, Harp-guitar, mandolin and a flash mob on Zoom. There were a bunch of a Capella versions of the old tune, as well. And I was blown away by the heart-felt messages that they shared with me. I was literally serenaded from across the country and here in town. Powerful stuff.

I know I would have been uncomfortable in a large social setting, so this turned out to be a perfect way to celebrate my birthday among my friends.