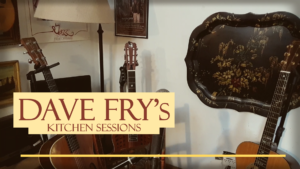 I had been hesitant to begin my family webcasts on Face Book, but took the plunge today with my first effort. The nagging hesitation is due to the technical challenges in putting it together. And, I almost pulled it off but now I know. I still have to grapple with online promotion.

I set things up on the FB Live page to launch at 10:30 am today and was given a 15 minute pre-show opportunity to see what it looked like without going live. I had it looking good, had my space all set, a list, shakers, scarves, instruments, my pal Tagger. The clock wound down and I started. About 7 minutes in, the site said that the video closed. What?!!!. I scrambled to get the site back and found a big ole red button on the bottom left that said LIVE. Oops. So I pushed it, and since I was playing banjo already, I just continued A Place in the Choir. Now seeing that I was live, I just rolled right into it. Yes, now I know.

I had started off with I Like Peanut Butter with a nice, friendly introduction but that went up in thin air. (I can use it next time.) I introduced Tagger, my childhood stuffed animal and how he was beat up out of love. I’m looking forward to having him on camera more – some 67 years later. I followed with Down by the Bay on mandolin and Peanut Butter and Jelly. It went well.

I’m using the camera in the computer for now while using a mike and direct for my guitar to give me some control over the audio. We’ll see how this works when I review the saved show. I’m getting good at playing to the camera, with all the single song shots I’ve been doing all along, so I think that’s going to pay off. But, I’m going to invest in a better camera so next week’s shows will be better quality.

I did Apples and Bananas next on mandolin and I have expanded that song with playing with the vowels sounds as we go through. I can’t just play the songs; I have to juggle them to make it come real. I followed with scarves and Jelly in the Dish, tossing them up at the end of each verse. Sometimes they landed on my head or guitar or floor, and, once again, I enjoyed the spontaneity.

I pulled out Bear Hunt (it wasn’t in the set) and did a pretty good version of that. I’m a little out of shape, performance-wise, so I kept it short and sweet.

I finished up and thanked folks for tuning in and invited folks back on Friday. The template seems to work well and ended up being about 40 minutes.

I rolled through the comments (I’m not used to doing that in real time, but something I’ll have to learn to do) and some great stuff came up: “Soynut Butter” instead of Peanut Butter, “spunky”, “nice shirt” “Tagger King” (I knew that would come up). Two kids and their mom caught it from England. Another mom (now grandmom) said that her now 40-year old twins used to come see me.

My friend John Christie said he was wailing along on electric guitar at home. I said I’ll leave a space for his lead on Friday.

Perhaps the coolest comment was from Chelsy, my daughter-in-law, who said that my grandson Jayden was glued to the screen. He’s only six months old so I did my job. I knew he was watching but great to hear he was engaged.

I’m hoping that kids and folks will become regulars and that I can tailor the shows to them, drop names, react to the comments and other ways to really connect in real time with this virtual audience. I’m well on the way.