This is a long but welcome gig on my end-of-the-year schedule. Peeps Fest is a two day family festival at Arts Quest here on the SouthSide on the New Year’s Eve and the day before. I had the opportunity to snag the day before in case a fat NYE pops up. I trade sets with Eddie Ray, a Reading-area magician in one of the “ballrooms”. There’s a small sound system and some chairs serve as a stage while various hands-on arts and science activities take up the rest of the room. Thankfully, we can hold our own in the chaos. But I have four sets with Eddie’s three sets in between. For me, it’s a long day, from 9:15 arrival to my departure at 5 pm. 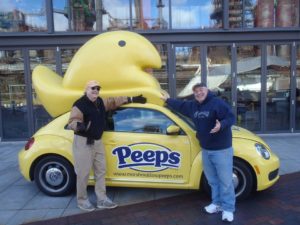 I was real glad when my friend John Christie asked if he could sit in, pro bono. It made for a much more enjoyable day for me, not only for his fine licks on guitar, but his presence makes it easier for me to concentrate on the audience, stretch the songs out a little more and give the adults some nasty electric guitar along the way.

Amazingly (and perhaps because of the rainy weather) there were people in the audience from the get-go. And there seemed to be a critical mass of kids and parents for the duration of the event. There were times in the past when it was me and my guitar and the volunteers in the room.

There are always several great moments.

One family was encouraging their young son to ask me for a request. After some prodding, he said he wanted “Figure It Out” from the Playground Album. I learned it from Michael Cooney and actually seems over the head for most kids. It mentions Einstein, Buddha, Freud and Isaac Newton’s sister. Serendipitously, I had just played it the week before at Dave’s Night Out. So, I played it for him to the delight of the mom and son. 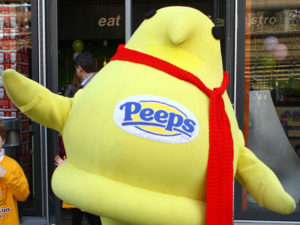 Later in the day, John and I were stretching a dance tune, and while the kids in front were playing with scarves, puppets and shakers, a tall, well-dressed black man came up and started to dance for us all. He was all arms and legs but he moved with a finesse and style that caught our eye, and eventually everyone in the room. We finished the tune, thanked him and he quietly walk out into the room. It was a wonderful moment, especially when the musicians and the dancers connect. It’s a form of communication that is older than spoken language.

I finished around 4:45. I was able to pack up quickly, pick up my daughter Rosalie in town and make it to the airport in time to pick up Sister Janet at 5:20. Such efficiency. My throat was sore the next day.  I was paid well. I got to play with mu friend John. There was dancing. It was a  good day on the planet.