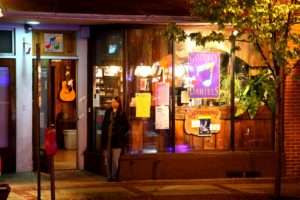 It was a struggle to find folks to play this gig this year. In the past it was billed Three Generations of Godfrey’s with myself, Dina Hall and an emerging songwriter from the community. Dina’s backed out and the younger folks are quite interested. So, I called my friend Kris Kehr to see if he was available and willing and he jumped right in.

I was hoping to attract some younger folks to the early show – we billed it as family-friendly. That turned out to be a good thing. Although there were no young children, there were some tweeners with their parents.

Kris and I decided to split the material and that turned out to be a great idea. Folks are used to seeing Kris as my bass player but were not familiar with his large repertoire of folk and original tunes. He took folks by surprise.

I started out with the playful family stuff – Cat Came Back, We Gave Names, etc. to connect with the teens and the general audience familiar with my “classics.” I actually screwed some of them up – part fatigue from Peeps the day before and part creeping senility. But we settled in nicely.

I pulled Blue Mule out of nowhere and it sounded great. Probably 20 years since Kris played it. I introduced Golden Bird for the first time in front of folks and it found its legs and seems to be part of a new repertoire. I found out it was written by Levon Helm. Damn!

Kris brought out a 12-string, octave mandolin, mandolin, Martin 6-string as well as his bass. This made it possible for Kris to back me up with a wide swath of sounds. Voodoo Chile sounded great with my mandolin and Kris’s Martin capoed up the neck. And when we finished off the evening with Here Comes The Sun, one that we had never played before, Kris chimed in with his mandolin which really sparkled with my Martin capoed up five. It was also a great tune to ring out the old year.

It was remarkably a “family” evening with Kris’s  wife Julie and his precocious daughter Lili. I was glad to have daughter Rosalie in from Italy and sister Janet in from Ann Arbor. We got to play for our families. There were lots of familiar faces in the audience and some newcomers, too. In fact, one couple dropped a $100 bill in the donation basket. Folks enjoyed the show.

Kris was really grateful for the chance to play his music on this stage, a brand new experience for him after all these years of friendship. People ate up his originals as well as his solid backup on my material. I have no problem having him take excursions on his bass as leads in my songs. His work on Lessons from Pete and Giants sounded particularly good tonight. The lead bass takes people’s ears by surprise.

It was an early New Years Eve for everyone and that was greatly appreciated. It’s been a rather tough December but being able to play for my family, with my friend Kris, and a Godfrey’s audience made for a wonderful way to end 2019.