I am usually ambivalent about opening for this evening’s show. Having done 7 hours at Peeps and two sets at Godfrey’s in the past two days, I was honored to do it for my friend Jack Murray. He asked late in the process so I had almost resigned myself to sitting out, and that would be okay. 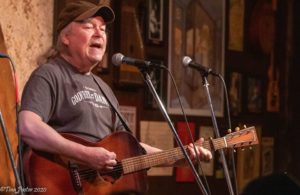 The nice thing about this gig is that can make it brief – three songs – and get off stage to make room for the six-piece band. I wasn’t bound to do Hank Williams’ tunes (or, I ignored it) so I picked out Rosie is a Friend of Mine, Golden Bird (second night) and finish with Legends. I joked that John’s song was what Hank Williams would have written if he were John Gorka.

I stood for this one and felt my voice was a little strained, either from stage stress or vocal fatigue from the last few days. It felt good to do a solid short set and be done for the evening. 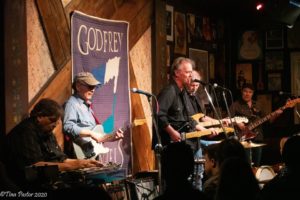 Jack has a crackerjack band, The Blue Tarp Wranglers, with some great players, so there was lots of sparkling leads on Jack’s mix of Hank, Ricky Nelson and other country songs. He does a great job gathering the songs, presenting them with class and allowing his sidemen to shine. Jack had a full house, too…. on a New Years’ Day night. Impressive. Ramona’s birthday.

Daughter Rosalie whipped up an Italian pasta dish for Sister Janet and me and we dined above the sound of the first set.

I did what I thought an adequate set but got some nice feedback from some friends and acquaintances about the songs. Golden Bird stood out and I think surprised people. And a friend said my Martin commands the audience to listen. That’s a nice thought. I was surprised to get back some positive vibes for my set. Sometimes I just don’t know.