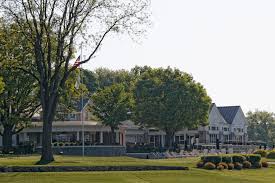 I returned to Lehigh Country Club for a Santa Brunch on Sunday. I do a similar event annually for Brookside CC (next week) and I know that it works really well.

I was asked to do 11:30 am to 2 pm and, thankfully, I planned on getting there early. I was set up at 11 am while families were already arriving for the brunch (still being set up). So, I did the obvious thing, I started in with the few families hanging out, engaging the kids in my sound check, opening up the bag of instruments, working on the micro-level at this point. It really sets up the atmosphere for the rest of the day. Building bridges. 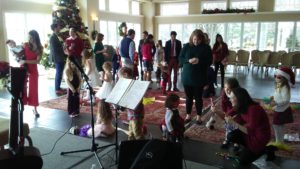 My office for the day

I had a big, open space with a nice tree on my left. Families would stop by for pictures by the tree while I dealt with the kids, parents and grandparents in front of me. I always try to address the dads and grandfolk while I play. I know I’m making some precious moments in a very safe and welcoming atmosphere. That’s why this works so well. Where else do the grandparents get to play with their grand kids?

I was on a riser that I was uncomfortable with initially. I like to work on the kids level. But, today, it seemed to add to my presentation. One of the initial boys that I engaged with his younger brother and dad asked to come on stage to play his Caterpillar. He stayed up on my left side for hours, totally engaged on that instrument. (Later on stage, I asked him if he played any instruments, he said, “This one.”)

The other kids picked up on this dude and started to come up on stage with me and that is simply “click bait” for the parents. The kids get a real kick out of the experience. At one point out to one kid to not stand in front of the star – me.

The bag of instruments is a sack of gold. The scarves were, as always, a great way to engage kids who shy away from instruments. And the puppets are equally potent in a non-threateningly way. And the grandparents enjoy picking up a tambourine, too.

I mixed Christmas tunes, and thanks to the length of the gig, able to repeat a few tunes to stretch the sets. I jammed with Santa. The manager thanked me profusely for my skills and even offered some extra $$ for the additional time.

It’s something I do that pays quite well and serves a strong service to this community’s families. That’s pretty cool.