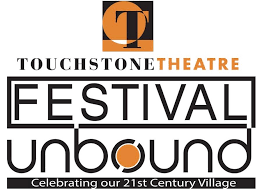 My good friend and “brother” Bill George and Touchstone Theater has put together this ten day arts festival in Bethlehem,  celebrating our community with the arts. I definitely shied away from committing to participating in large projects that required rehearsal time, but was invited to be a very small presence in it.  I was asked to do my bag o’ instruments gig on Wednesday for an outdoor mashup on the Greenway. As it turned out, it was cancelled due to potential rainy weather (which never happened), but they asked me to perform at the Bethlehem Library as part of their “art-making” project. I was glad to oblige.

I set up in the community room (named for my friend Bob Cohen) and started to play while kids (and a few moms and dads watched) did art activities. Gradually, the kids and families drifted over and started to play instruments, dance and sing. There were few folks but we managed to have some pretty good interactions.

One particular girl really invested in the activity while her dad looked on. Eventually, I got them both involved (thunder tubes, of course) and we had a great time. As I finished up with very few people left in the room, the dad came over and thanked me, saying that they had only come in to get a few books and ended up taking in the whole experience. I gave him a CD with Giants on it. I felt that I had made a difference, even though it was only among the three of us. (He said he remembered me doing The Cat Came Back)

I’m fine with the small interactions.