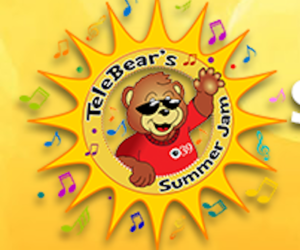 I’ve been fortunate to be included in this series of children’s show in the studios of our local PBS station the last several years. Kira Willey, a wonderful family performer in her own right, has booked this ten day kids’ fest with some serious national acts, so I’m honored to be among them. I’m quite a bit different in that I’m not as presentational as these acts. I’m not as slick performance-wise but that’s on purpose. The staff at the station would agree and were impressed with how I work.

There were two sets at 10 and 11 am, and though the shows were free, it was ticketed. They said both shows were sold out, but neither show was crowded.

The kids (and a few parents) sat on the rug in front of me. I had a sound system that wasn’t totally necessary (I ditched it last year) and I settled in with a good audience. The first set had one challenging boy who I had to keep my eye on – he had his eye on my guitar and mike stand, but I was able to work him into the act. Peanut Butter, Tutti Tah, Down By the Bay, Bear Hunt and more, but there were more toddlers than I expected so I had to get them dancing earlier than usual. I went to the scarves and that was a very good move. They were all up and twirling, waving scarves and was quite nice scene. I could see some of the TV people in awe of the movement and colors.   Video Aug 07, 10 35 20 AM

The second set was more of the same with one 5 year-old lad with a “Brain Power” t-shirt on coming up with all the rhymes in We Gave Names to the Animals. I brought him up with me to challenge the rest of the audience. He was great and, later on said that he listens to all my albums. This set I went with the bag of instruments instead of the scarves and, once again, there was a joyful romp of kids in front of me.

I actually sold a few CDs and had more than a few mentions about grandparents who had brought their now mid-30’s kids to my shows. That’s still cool for me.

There were some TV-39 folks who hadn’t seen me and said that I was great. I’m sure my level of interactivity and semi-adult humor that lurks beneath the surface of my patter is different than the family “shows” that the other performers do. I’m glad that my approach sets me apart from them.

I was treated well with a green room, snacks, fruit cup and more, just like the big boys. I was paid very well and had the respect of the crew. Pretty good day for me.