Martin Guitar has a small stage under the Hill-t0-Hill Bridge at Musikfest. They’ve been sponsoring an open stage with a list of folks who signed up for a half hour slot during the festival week. Yuengling Beer is the main sponsor of  Lagerplatz so there is a big ole beer truck connected to the tent contributing to a persistent  roar. And there is some kind of refrigeration noise going on behind the stage as well. And, I suppose that, when the tent fills up with beer drinkers, there is a constant din as well. A very challenging situation. 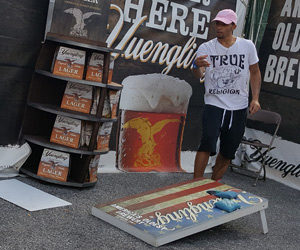 I suppose I was lucky that I had a noon slot to start off the day. My friend Nick was doing sound so I was in good hands to have, at least, some kind of presence for my set. There were only a few folks in the house, but the audience included a mom and her Downs Syndrome daughter who have come to see me every Musikfest for years. The girl is a big fan so I asked her what song she wanted me to sing. The Cat Came Back. So, I asked her to help me sing it, and she did some interpretive dance instead. The folks in the tent were polite and it was a nice moment for all of us.

It was good to get my 000-15M back in working shape. Big Thanks to Brothers Music in Wind Gap for brainstorming my problem and getting my guitar back on the road. Good to chat with Joe Janci as well.

I feel sorry for the folks who have this as their only opportunity to play Musikfest. It’s quite noisy. When this chance to play surfaced several months ago, I really wanted to have a presence at the festival but I probably won’t do this again. I was surprised that Martin can’t make this a better arena for acoustic music but they have to do what they can. It’s good that folks can point to this that they had a Musikfest appearance.