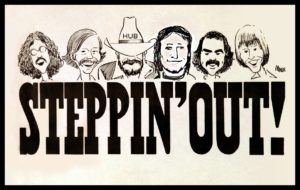 Steppin’ Out! was booked for the last slot on the first Sunday night at Liederplatz, and though I was glad to land the gig, it was a very tough spot for us. 9 pm to 11 pm on a Sunday night is not particularly good for our demographic, but we prepared well and played well.

We decided to play straight through, no breaks. I knew that if we took a break, folks would certainly leave and we would be playing to an empty courtyard. I hoped that we could sustain the energy, mix up the styles, have different folks lead the songs and maintain a good diverse set of music. It did seem to work.

We had several rehearsals (without Reid … living in N.H.), worked on the old stuff and brushed up on some of our newer material. Jeff had two new tunes, Kris had a Tom Waits song from last November and I have a bunch from the Troubadour CD. Reid is good with his expansive repertoire and great recall of our old tunes. Unfortunately Peggy couldn’t make this one due to her full-time job. She was missed.

We gathered at 2 pm on Sunday to roll through the set I had worked up, and Reid came by later after grabbing some much needed shut-eye after driving down from New England. It was a good rehearsal and it made a big difference in the evening’s show. It did take a toll on Hub though. 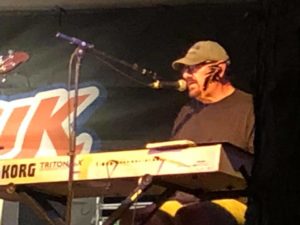 Hub’s developed a carpal tunnel issue in his left hand and struggled all day, and especially during the evening’s set. We had originally had Hub play drums at the end of the night, but Jeff and I decided that it wouldn’t work. Hub’s Song for You came off wonderfully and there was no hint of his pain in the performance. I was in awe of his courage in this song and his overall chops all night. He could barely move his hand at the end.

We found out the Reid has a rare blood cancer. He produces too much blood and will have to drain a pint of blood every month from now on. He’s glad that at least it’s controllable. We talked about how lucky we are that we are still playing, still a band, and still alive. I am simply glad that I’ve overcome my prostate cancer and have two new hips so I’m not complaining. Such thoughts at our age. 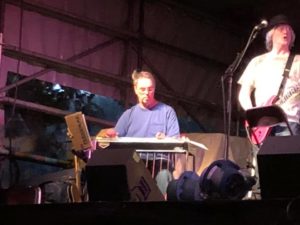 I was impressed with Jeff’s drums and Kris’s bass for our rhythm section and, upon reflection, made a huge difference in maintaining our energy for the whole two hours. Kris is fully integrated in the band now. Chris’s steel and rhythm guitar were strong, Reid’s vocals and nasty guitar work also gave us a wonderful edge to our music. I actually nailed the lyrics and chords to all my songs (surprise, surprise!) and felt good about our overall stage craft. We played really well and it was a solid show. I just wish we had a better time slot. I mentioned near the end that I was proud of the band and that they are my brothers. Truth. 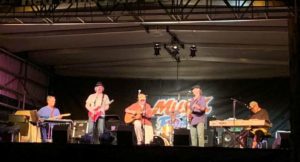 The sound crew of Dave Reichert and Terry Mutchler were a joy to work with and they made us really comfortable on stage. No small thing. It was hot though and we crawled across the finish line at 11 pm. I was whipped.

There were some familiar faces from years back and it was quite nice to have those folks stick it out to the end. I know that they enjoyed our music, and the fact that we can still do it. We’ll do our Thanksgiving Friday gig in November, and the hard work we put in for this gig will make a difference for that gig.