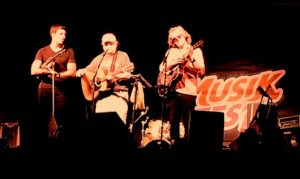 I was tickled to get a message from my friend Craig, asking me to do a couple of songs during his Liederplatz set with Nyke on Monday night. It’s a great stage, with wonderful sound, and I get to play a couple of songs with two friends and creative musicians. That’s a two-fer in my book. Actually, a squared.

Craig asked me to play some stuff from Troubadour, and this was the first opportunity to play these tunes and connect the album with his many Lehigh Valley fans. Tonight was the night.

Nyke and Craig simply tear it up when they play. It is acoustic rock and roll. Now Craig has developed some nice folk sensitivities with his show. Nice personable patter, superb acoustic guitar sound and intelligent playing. That’s a blueprint for contemporary folk performance. I’m so glad to see my friends “get it”, if I may be so presumptuous.

Craig called me up about 25 minutes into his set, with a very nice introduction. I immediately dismissed him from the stage. (That actually gave him a break….. no small thing for a front man) I lined up Nyke for Stan Roger’s Giant, a chance to break the intensity, introduce a new modality (open tuning on guitar), a create a sense of exploration. I wrassled my guitar into the new tuning, talked about Stan and launched into the tune, with great trust in Nyke to figure it out. It was a fine journey. Nyke Knows.

I liked how it broke up the intensity and volume of C/N, introduced a different, yet palpable improvisation style to the show. I sang it well, though I repeated a verse, but figured out how to make it work, on the fly. Set up the improve chords, when to bring it back, when to bring it home. It really worked tonight, thanks to working with real pros.

I opted for Lessons from Pete for the second song. It was right for this crowd. I got my guitar back in tune and Craig picked up on my tuning and talked about Martin Guitars. Having put on a new string between gigs, Craig knows what to do on stage. I had the chance to talk about my GD Martin and the Utah story about Eleanor Roosevelt. I had some space to chat with the audience. And I talked about Pete Seeger to this relatively new folk audience and my gigs at Philly FF. Important. d

I laid down the chords to Lessons and Craig and Nyke were there. I was hoping to channel their energy later in the song, and that became understood in the moment. (This is actually the point where the communication gets thick and the trust sets in.)  I laid out the verses and bridge up front, gave Craig and Nyke some early leads. I headed towards the later verses and bridge (we were in sync by now) and brought it down to nothing for the improvisation part. Here’s where we soar.

Having produced this part of the Troubadour CD, I knew that Craig and Nyke would know how to build, but I let Nyke know what to expect, in the moment. It actually developed quite organically, as expected. We built and brought it back for the final denouement. It landed quite satisfyingly, for me, Craig and Nyke and the audience. I wish I could bottle the reaction of the audience. But, such is the life of an artist…..

This was a special moment for me.