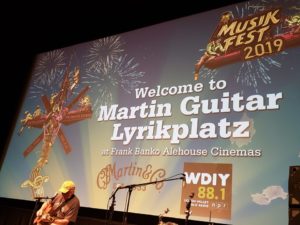 This was a new Musikfest venue for me this year, in several ways. First of all, I’ve not played any gigs on the SouthSide as part of MF. All of my umpteen years at MF have been on the NorthSide. Today’s gig was in one of the movie theaters in Arts Quest, the mega-entertainment place I’ve played over the years.

This year, in the movie houses, we had air-conditioning and comfortable seats. What’s not to love with this gig?

Actually, I’m sure that was part of the draw.

I settled in for my 45 minute set. There was a nice movie theater audience of random kids, families and older folks. I had to figure out out to play to this diverse crowd. I was hoping to do my adult “songwriter” stuff, but no, I had to do some kids’ stuff, and that proved to be a good thing.

In the front row was a young girl who knew me from Calypso School who wanted me to sing the song I wrote for her school. She didn’t remember it and neither did I. We moved on from there, but this was where I would begin from. 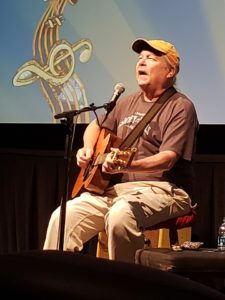 I decided to mix the family stuff and my ‘real’ stuff and it was a good choice. I was able to mix the Cat Came Back, Giants, I Wanna be a Dog in with some nice chat, as well as maintaining space for my adult stuff: Me and Martin growing Old (site sponsor)  Lessons from Pete and the 5-string version of Pay Bo Diddley (broken string).

I played for cheap this year for this gig, but I sold some CD’s to help out, and it was a rewarding, attentive and reactive audience to play for. And I didn’t have to park too far away for the gig. It all adds up.