I headed over to Ag Hall at the Fair Grounds on Thursday for the second of my three sets this Labor Day Weekend. I never know what to expect with this very random audience but was pleased to see several familiar faces in the audience, folks who are there to catch whatever I serve up. There are always folks cruising by that stop and sit down. Still, it is a very transient audience, difficult to hold for the full hour show. I can live with that, though it does affect my tips.

Today’s show was unique in that there were few kids in the audience. Starting with I Can See Clearly Now and Here Comes the Sun, though conceptually a good beginning, chased away the few kids in the crowd. Half way through the show, I remarked, “Well, that got rid of the kids!”, and that brought a chuckle from the adults in front of me.

I did Giants, and, with no kids in the audience, I brought up a gentleman to play Thunder-tubes. He was a real sport and knocked it out of the park, complete with a whole raft of scary faces. I commented that he turned out to be the perfect “kid” for the song. His wife videoed it, just like a proud parent. 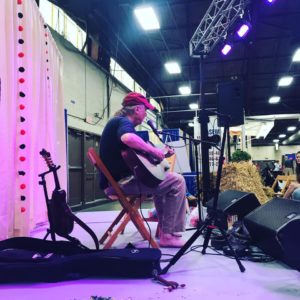 I have one autistic fan-girl and her mom who have come to my shows here and at Musikfest (when they had a family stage). She is quite demonstrative, loves I Wanna Be a Dog and we enjoy our friendship. She loves to get up front and move during the show. I call it “interpretive dance”, which is exactly what it is. I notice that she gathers a lot of attention from the audience but I no longer care that we share the spotlight. (Yes, I once thought it a little embarrassing) But, it really is about appreciating the diversity of my musical community. I think my audience recognizes this, as well. I’ve grown and we all have come a long way.

As I was finishing up, there was one wide-eyed two year-old boy who came up front with his grandmom, wondering what was going on here. I dropped my adult pretenses and did Magic Penny directly to him, with the rest of the folks singing along. It was sweet.

This is a tips gig for me and today I garnered $2 (the Thunder-tube guy said he would pay me for the opportunity to be on stage with me) but I did sell several CDs. One lady bought Troubadour for herself and two kids’ CDs for a young neighbor down the street. I do enjoy talking with the folks who come up afterwards, telling me when and where they’ve see me perform and, to my edification, telling me never to stop doing what I do. That was worth the two bucks right there.